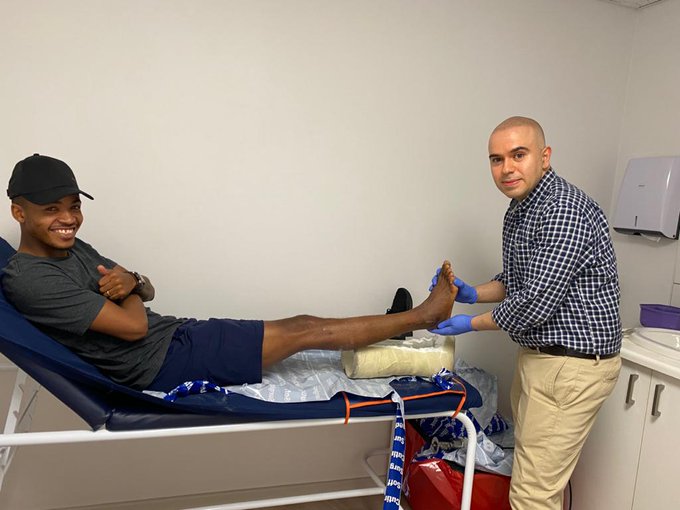 Mamelodi Sundowns utility player Thapelo Morena took a giant step towards recovery from a freak ankle injury after the club announced that his cast came off and was replaced with a moon boot on Monday.

The 26-year-old Randfontein-born star was awkwardly injured after his right foot got stuck underfoot and his ankle dislocated on a slippery Loftus pitch in a Nedbank Cup last 32 stage clash against Tshwane rivals SuperSport United last month.

The injury looked unusual with Sundowns doctor Carl Tabane predicting at the time that the player would be sidelined for a period of four to six months.

“Some good news Masandawana‚ Thapelo is making great progress in his recovery with his cast coming off today and being replaced with a moon boot‚” Sundowns announced on Twitter.

Morena had surgery and a few screws were inserted in his foot to stabilize the ligaments.

The setback also saw Morena miss out on Bafana Bafana coach Molefi Ntseki’s team announcement last week for the 2021 Africa Cup of Nations qualifiers that have now been postponed due to the deadly coronavirus that has either forced the cancellation or postponement of sporting events around the world.

As with most countries around the world‚ South Africa’s Premier Soccer League has ground to a screeching halt due to the pandemic.

The SA Football Association has halted the football programme until April 4 when the decision will be reviewed.

Kaizer Chiefs director Jessica Motaung says they would be disappointed if the season is not completed due to the coronavirus outbreak and the ...
Sport
2 years ago
Next Article