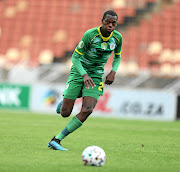 Assuming he's well nurtured and stays grounded, budding Baroka striker Evidence Makgopa seems to have what it takes to be one of the leading centre-forwards in the country.

Makgopa is an all-out towering forward, but he can also play as a second striker, which he had been doing with Nhlanhla Mgaga at Baroka.

The prodigy, who turns 20 in June, showed his potential by netting a brace in what was his second top-flight game when Bakgaga outwitted fellow relegation candidates and provincial rivals, Black Leopards 2-0 three weeks ago.

Ascending to the top-flight at a time where his team have no room for slip-ups, and threatened by relegation, has taught Makgopa to stick to the basics, and limit fancy traits in his style of play.

"As a striker my focus is always on goals. As you can see we're fighting for survival, so I can't afford to do unnecessary stuff.

"When I get the ball... the aim is to keep it simple, always," the soft-spoken Makgopa told Sowetan.

"Joining the team at that moment [when they're battling for survival] changed the way I wanted to play. I threw all the flair and tricks out of the window.

"I am now more interested in helping the team get goals to move up the table. Like any other boy, when I grew up I liked to do fancy things with the ball, but I have realised that scoring is more important."

The lad from GaMampa village, near Burgersfort in Limpopo, was promoted from Bakgaga's MultiChoice Diski Challenge (MDC) in January. Makgopa was scouted by then Baroka CEO Morgan Mmamila in 2018. He idolises AC Milan's Swedish superstar, Zlatan Ibrahimovic.

"I started playing football when I was 13, looking up to Zlatan. He's a strong striker who can score at any time [and] that inspired me. It's Mr Morgan who took me to Baroka to be assessed in 2018.

"When I arrived [at Baroka], they liked what they saw... the rest is history," said the former Poo Secondary School pupil. He matriculated at the same school in 2017.

As he has netted three times in four games across all competitions in his first season, Makgopa is optimistic he can win the Golden Boot next season.

"This season I am targeting six more goals, hopefully that'd be enough to save the team from going down. In the new season I feel I can score more and win the top-scorer award because I would have gone to the pre-season with the team."