Irvin Khoza: PSL has agreed to suspend all matches indefinitely 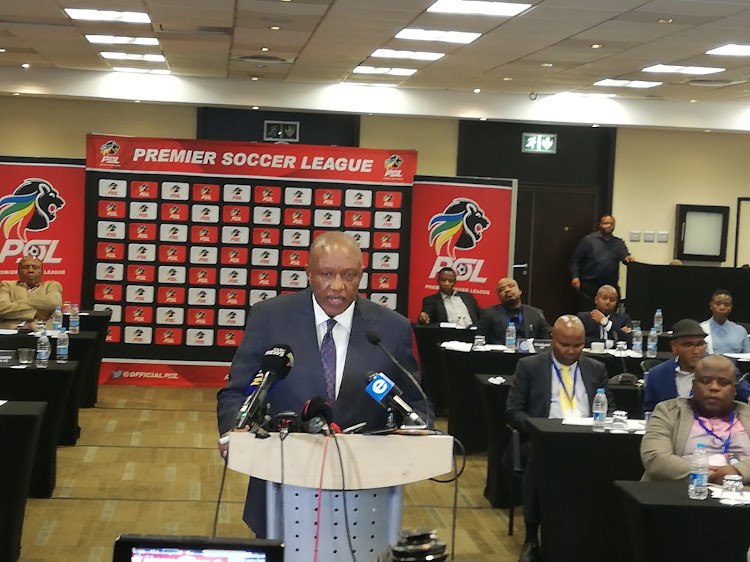 Premier Soccer League (PSL) chairman Irvin Khoza addresses the media after a league board of governors meeting at Tsogo Sun OR Tambo in Johannesburg where it was decided matches sill be suspended until further notice in response to the coronavirus outbreak in South Africa.
Image: Marc Strydom

The Premier Soccer League (PSL) has confirmed that it will continue its suspension of matches for until further notice in response to the coronavirus outbreak in South Africa.

The decision‚ announced by PSL chairman Irvin Khoza‚ was taken after a six-hour meeting of the league’s board of governors (BoG) at a the Tsogo Sun OR Tambo in Johannesburg on Thursday.

The coronavirus reached 150 cases in South Africa on Thursday‚ up from 116 on Wednesday.

The PSL’s BoG had presentations from government departments including Deputy Minister of Health Joe Phaahla and the ministry of safety and security.

“At this point as the board of governors we endeavour to make sure that all issues of compliance are complied with‚” Khoza said.

“Thereafter we have will report back that the league remains suspended.”

Khoza admitted the league has financial obligations to its sponsors and broadcast partners.

“The important thing now is to concentrate on the human capital‚” he said.

The PSL’s decision falls in line with the SA Football Association’s (Safa) directive made on Wednesday that football be suspended.

Safa’s suspension is until on April 4. Khoza said the PSL will form a committee to establish the length of the PSL’s suspension.

State President Cyril Ramaphosa declared a national emergency on Sunday‚ a measure of which is a prohibition on gatherings of more than 100 people‚ which affects all professional sport in the country.

Major sports events around the world that have been hit by the coronavirus pandemic:
Sport
2 years ago

An unusual time as the one we are facing, thanks to the coronavirus outbreak, would naturally lead to consequences which we are trying to avoid, and ...
Opinion
2 years ago
Next Article