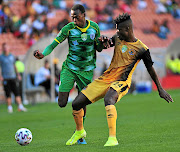 Having completed his mission of getting into the semifinal of the Nedbank Cup, Baroka coach Dylan Kerr now wants his side to translate their cup form to league matches.

Baroka reached the semifinals following a 1-0 victory over Black Leopards at Peter Mokaba stadium on Saturday. They have now completed a treble of victories against their Limpopo rivals Leopards and Polokwane City.

"It's good to get two wins in a row, we spoke about it since I have arrived, we won one and we lost the next one so two wins in a row in the cup and the league and to be in the semifinal is fantastic for the players," Kerr said.

Despite being in the semifinals, Baroka are still battling in the relegation zone. They are 13th on the table and are tied on 23 points with Polokwane and AmaZulu.

They face AmaZulu in the league match on Saturday at King Zwelithini Stadium (8.15pm) and this is a match Kerr wants to win at all costs.

"Now our focus is on AmaZulu. We need to go down there with the same
determination and creativity to beat a team that did well against Kaizer Chiefs [but] struggling at the moment with a change of management.

"We need to go there with a bit of creativity because I see we are doing it now and it's pleasing," Kerr said.

Joseph Douhadji scored an own goal to hand Leopards their third defeat against their provincial rivals this season.