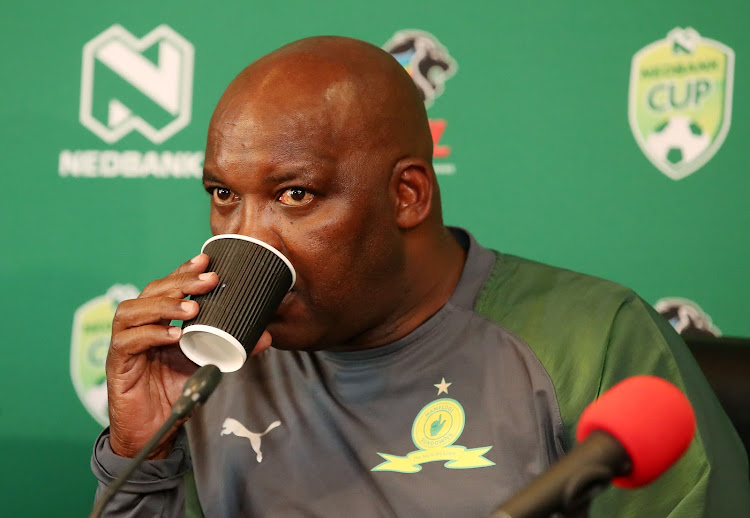 Mamelodi Sundowns coach Pitso Mosimane has said his team need to keep the Absa Premiership title race exciting – though‚ of course‚ that assumes there is a race left to run.

The immediate fate of domestic professional due to the global coronavirus pandemic football is being deliberated by the Premier Soccer League (PSL) executive committee on Monday.

President Cyril Ramaphosa on Sunday declared a national emergency and measures including a prohibition on gatherings of more than 100‚ so the PSL seem sure to declare matches either to be played behind closed doors‚ or suspend football completely.

Mosimane‚ speaking after Downs’ bruising 1-0 extra-time Nedbank Cup quarterfinal win against Highlands Park on Saturday‚ said his team will aim to put maximum pressure on leaders Kaizer Chiefs in the league – whether at present‚ or once it resumes from suspension.

Second-placed Sundowns are due to meet fourth-placed Orlando Pirates at Loftus Versfeld on Tuesday night.

“We have to try. We have to keep the league [title race] going. Because we can’t let the league be decided now like in the UK [where Liverpool are certain winners with a huge points gap]‚” Mosimane said.

“This thing‚ you can’t drop it. At this point in time‚ I remember last year we were fighting for the league with Pirates‚ and we went to Morocco – I think we were seven or eight points behind‚ but they had played three more games.

“We managed to come back‚ and do that. Ja‚ games in hand are a problem. The game on Tuesday is a game in hand.

“And you are playing a big team‚ you’re playing Pirates‚ which is never easy.

“But it’s never easy. Even Wits still have a mathematical chance to win the league. They are playing Chiefs. So you never know.

“You want to win and have three more points. But you should be clever also‚ don’t be too emotional with a game against Pirates.

“Because sometimes you even get a point. You remember the point that I sometimes say‚ ‘I must take it’; and you guys say‚ ‘Ah‚ you need the three points‚ come on go for it’.

“A point against Pirates is a big point. Maybe get a point‚ because maybe other people don’t. And if they do‚ we are still going to go.

“I’m happy that we are at home – we’ve been winning at home. Because I’m waiting for the last five games – we will go five in a row‚ that one I can guarantee you.”

Chiefs (48 points from 22 games) are scheduled to meet sixth-placed title outsiders Bidvest Wits (38 from 21) at FNB Stadium on Wednesday night.

The International Olympic Committee (IOC) will hold talks with heads of international sports organisations on Tuesday in response to the coronavirus ...
Sport
2 years ago

Manchester City's appeal against their two-year UEFA ban from European football is up in the air as the Court of Arbitration for Sport in Switzerland ...
Sport
2 years ago

The African championships scheduled for Durban next month have been postponed because of coronavirus fears‚ Swimming SA said in a statement on ...
Sport
2 years ago
Next Article