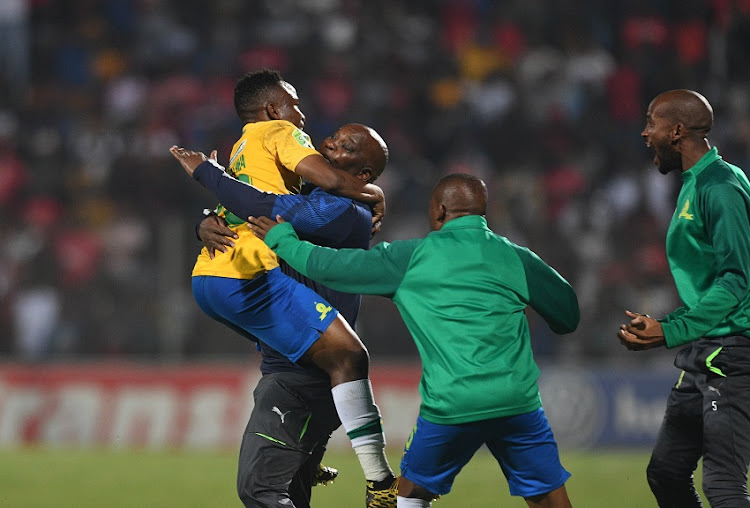 Kgeletso Makgalwa’s extra-time strike earned Mamelodi Sundowns a 1-0 Nedbank Cup quarterfinal victory that they had to fight every inch for against tough as nails Highlands Park at a packed Makhulong Stadium on Saturday night.

Lively little emerging forward Makgalwa’s tasty 115th-minute goal decided a fierce contest, the intensity of which was only mildly marred by both teams’ inability to finish their chances, and in which Park pushed Downs throughout the 120 minutes.

This was a riveting cup game where Highlands were keyed up to make things as difficult as possible on their notorious home ground for Downs, and try to add a second big scalp after Kaizer Chiefs in the previous round.

Sundowns were equally up for the physical challenge that would be thrown at them in intense atmosphere at this compact township stadium.

In the end Sundowns, for all their quality, displayed their renowned ability also to fight for a victory.

Highlands coach Owen Da Gama brought in Tapuwa Kapini – for cup purposes – for Marlon Heugh in goal. The keeper was one of five changes from Park’s 2-0 home league defeat against SuperSport United.

Sundowns coach Pitso Mosimane had Tiyani Mabunda back in his central midfield for Andile Jali, left out to guard against a fourth booking and suspension for the Brazilians’ big league game against Orlando Pirates at Loftus Versfeld on Tuesday.

Mosimane can be loath to rotate, but four changes from a 1-0 midweek away win against Stellenbosch FC suggested it was not just Jali held back for Bucs.

Early on Downs right-back Anele Ngcongca nodded Jose Ali Meza’s corner to force Kapini down to a save at the left upright.

Sundowns found a rhythm, and a relentlessly soft touch, as mesmeric as their fans’ drumming, but Highlands held them too, some big tackles coming in.

Lebogang Maboe’s chip from the right found Meza to chest down in the area, Bevan Fransman making a classy challenge.

Lyle Lakay earned a free-kick being brought down by Makhehleni Makhaula on the line of the box. It was  perfect position for the former Cape Town City man’s left boot, and he shaped a low shot onto the left upright.

Highlands finished the half strong with Peter Shalulile through twice, Denis Onyango responding with a solid stop and the Namibian then sliding an attempt across the face.

Ten minutes after the break Musa Nyatama appeared to head Highlands into the lead getting in front of his marker expertly to Richard Mbhele’s cross. But the former Pirates man was a head offside.

At the other end Lakay was through to smack wide across goal.

Park, from their string of chances, had grown in strength, and bossed the game more than Downs in the second half, though Tebogo Langerman’s swerving drive had Kapini at full stretch for a spectacular diving save.

Downs had increasingly played the way they are most uncomfortable – pressed back by forceful Highlands, and without their normal lion’s share of possession.

With penalties beckoning, though, substitute Ryan Rae missed a cross field pass and allowed Makgalwa in behind him on the left, who had plenty of work to do cutting in and fashioning a fine right-footed finish past diving Kapini.