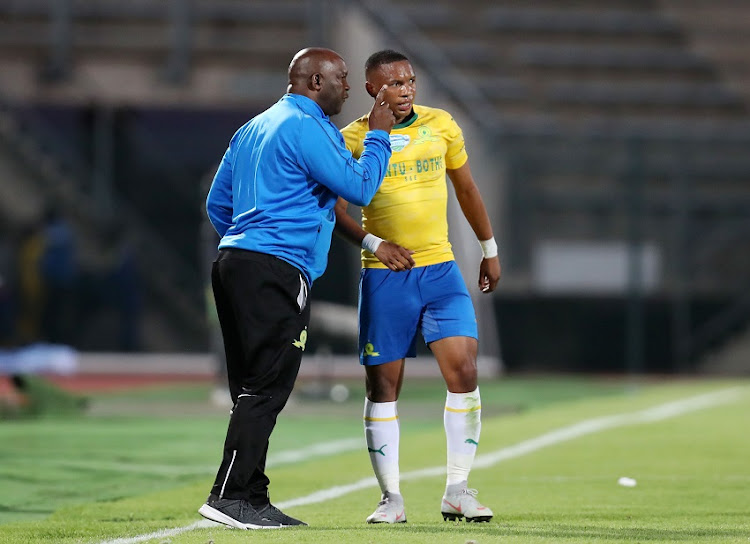 Mamelodi Sundowns have credited Andile Jali’s maturity as the reason for his change of fortunes at the club and return to Bafana Bafana.

The 29-year-old central midfielder joined the Brazilians to much fanfare in 2018 but his start at Chloorkop hit the skids as he was involved in a number of off the field shenanigans.

“I didn’t get him right‚ he got himself right‚” said Mosimane as prepared to take on Highlands Park in the quarterfinal stage of the Nedbank Cup at Makhulong Stadium on Saturday.

“I don’t want to get praise for his change of fortunes. Mine was to monitor him‚ advise him and to make him aware that it is the Sundowns brand that he represents.

“I also made him aware of protecting his image and to protect his family because I wanted him to return to Bafana Bafana‚ and to help us in the Champions League. That was my part‚ the rest was up to him and he has done very well.

“I have never seen him play like this. I remember there was a time at Pirates with Oupa [Manyisa]‚ he was playing well‚ but football has changed.

“That time to this time‚ the tempo‚ the pressing and kilometers are different. The spaces are compressed‚ you can’t compare the era of Eric Tinkler to the era of Jali.”

Mosimane also lavished praise on Jali for the amount of work he has done on his physical conditioning behind the scenes.

“He lost a lot of weight‚ he’s on top of his training programme and he is playing week in week out. It is unbelievable that we have him like this‚ it just shows that it is possible and I think he should be an example to other players to say you can turn around.”

On the clash against Highlands Park‚ Mosimane said he is expecting a tough battle against a hard running side.

“It’s a cup game‚ it has it has its own tempo‚ momentum and emotions. It is a difficult place to go – who wants to go to Makhulong guys? And we are also playing well rested teams.

“If you were not aware of what happened against Stellenbosch FC‚ before Tebogo Langerman went out to leave us with 10 men for about 15 to 20 minutes including optional time on the pitch‚ we were already slowing down. Stellenbosch were on top of us but we managed the game.

“You need energy at Makhulong‚ you need player availability‚ which is what we are struggling with because of injuries. And you also need the mental strength because they don’t pull out of tackles.

“They are strong and they mark man to man – they go with you whereever you go. But fortunately we have mental strength.”