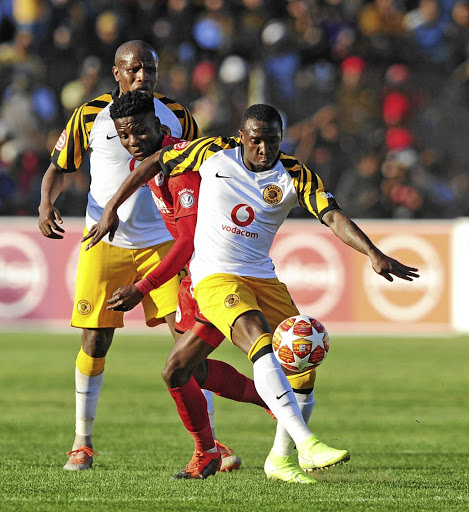 George Maluleka has signed a pre-contract with Mamelodi Sundowns for next season. /Ryan Wilkisky / BackpagePix

With the amount of quality Sundowns have in midfield, many deem the signing of Maluleka as a plan to destabilise Amakhosi in the title run-in.

With eight games to spare, Chiefs are top of the table on 48 points, four ahead of Sundowns in second place, who have a game in hand.

Chiefs announced on Wednesday that the 31-year-old Maluleka would be leaving for Downs at the end of the season after penning a pre-contract. But Mosimane sees nothing sinister about getting Maluleka from their rivals on a pre-contract.

The Brazilians coach reminded Chiefs they signed Katlego Mphela, from them, in a similar fashion in 2013.

"When Chiefs signed Mphela we were fighting for the league, so was that a strategy for them to distract us?" the Sundowns coach asked. "Wits have done that [signing players on pre-contract at this stage of the season], SuperSport have done it.everybody has done it, they [Chiefs] have done it also," Mosimane said.

The Sundowns mentor was reluctant to divulge his plans for Maluleka, insisting the club must officially declare him before he comments about him.

Midfielder George Maluleka has signed a pre-contract to join Mamelodi Sundowns in the off-season‚ Kaizer Chiefs have announced.
Sport
2 years ago

US-based midfielder George Lebese came out to defend former Kaizer Chiefs team-mate George Maluleka on Wednesday after it was revealed that the ...
Sport
2 years ago

Maluleka, who was included in the Bafana Bafana squad to face Sao Tome and Principe in the back-to-back Africa Cup of Nations qualifiers later this month, will face a stiff competition from the likes of Andile Jali, Hlompho Kekana, Tiyani Mabunda and Rivaldo Coetzee at Sundowns.

It has emerged that Chiefs are considering their options over whether to continue fielding Maluleka after this week's announcement. A source revealed yesterday the player might not feature as much in the remaining games, with his loyalty now in doubt after he accepted Downs' overtures.

Meanwhile, Mosimane also revealed they may have to face Highlands Park in the Nedbank Cup last eight at Makhulong Stadium tomorrow (6pm) without four of their influential players in Themba Zwane, Gaston Sirino, Tebogo Langerman and Siphelele Mkhulise.

The quartet suffered injuries in their Wednesday's 1-0 away win to Stellenbosch.

"Sirino has got the hamstring. Langerman has got a bone bruise, he could make it but I don't know. Zwane has got a shoulder [injury], you saw he never even celebrated his goal against [Stellies]," stated Mosimane. "I don't think Sirino and Zwane will be available. If they are on the edge of making it or not, I won't take the risk to play them because we have a game on Tuesday [against Pirates]."