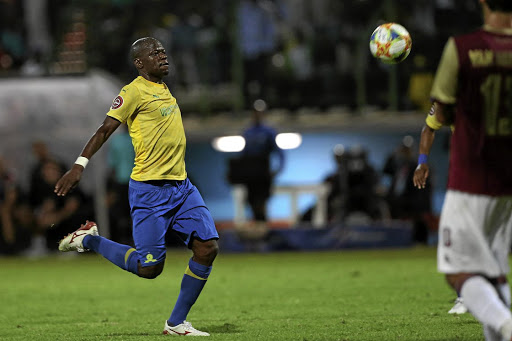 In the true sense of his coach Pitso Mosimane's "let's be honest" platitude, let's be honest, no one had prophesied Mamelodi Sundowns skipper Hlompho Kekana extending his contract at the Tshwane giants with a further four years.

Turning 35 in May, Kekana is already on the wrong side of 30 and it's common in SA that a player over this age is considered too old, hence chances of getting a long-term deal are always slim, however hard they work.

Such is the infrequency of players over 30 earning prolonged contracts in the Premier Soccer League (PSL) that almost everyone was in awe when Sundowns announced last week that Kekana had signed a new contract that would keep him at the club until 2024, when he would be 39.

Elsewhere in domestic football, this is unheard of. In January, Kaizer thanked hard-working midfielder Willard Katsande, 34, with a mere one-year contract extension.

Out of four league games Amakhosi have lost this season, Katsande played just one. This proves how important the Zimbabwean is to the league leaders.

Chiefs were beaten by Polokwane City (0-1), SuperSport United (1-2), Maritzburg United (1-2) and AmaZulu (0-1). Last month's defeat by the Team of Choice is the only game Katsande played where Chiefs lost.

Fresh from penning a four-year contract extension yesterday, skipper Hlompho Kekana is optimistic he can lead Mamelodi Sundowns over the mountain top ...
Sport
2 years ago

In May 2012, it's believed that veteran midfielder Reneilwe "Yeye" Letsholonyane opted to leave Chiefs because they were offering him a short-term deal, while he felt he deserved more after helping them to two league titles under Stuart Baxter.

Just this week, it was announced that George Maluleka, 31, will leave Chiefs for Sundowns this winter after Amakhosi offered him only a two-year deal, while the Brazilians want him on a three-year deal.

Bearing in mind the previous scenarios where clubs didn't give their deserving seasoned-campaigners long-lasting contracts, Kekana's case at Sundowns should be the catalyst for change, according to experienced defender Morgan Gould, who was given one-season extension at SuperSport in January 2018 as well. He also left Chiefs for free.

"Kekana's long-term contract should change the game altogether. Players must be given contracts based on what they offer on the field not based on how old they are," Gould, who's on the books of Stellenbosch on a one-year deal, told Sowetan.

Thulani Thuswa, the man who engineered Kekana's new deal, representing him through his agency Tyler Masons, gave all the credit to Sundowns for the unrivalled new deal of his client.

"Sundowns were very friendly in negotiations. I thank the president [Patrice Motsepe] for giving Hlompho a chance to continue being at the club," said Thuswa.