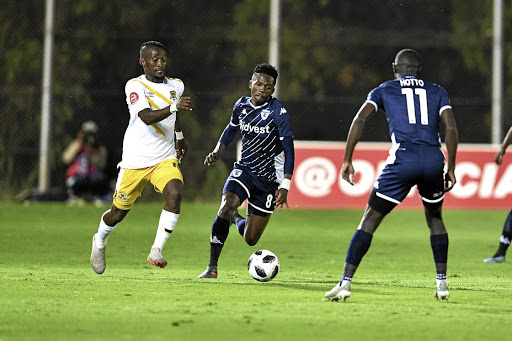 Tshwarelo Bereng of Leopards and Thabang Monare of Wits fight for the ball during their match on Tuesday night. Wits won 1-0.
Image: Gallo Images

Could this be the end of the road for yet another coach at Black Leopards?

Pressure is mounting on caretaker coach Alan Clark after the top-flight strugglers suffered their fourth consecutive league loss in midweek. Clark has been in charge of five league games - with one win and four losses. Leopards lost 0-1 to Bidvest Wits thanks to a Terrence Dzvukamanja goal on Tuesday night in a result that left them rooted to the bottom of the table.

Clark is the fourth coach to be in charge of the team with Lionel Soccoia, Luc Eymael and Cavin Johnson having come before him. Johnson was the last to be fired after just five games in charge where they lost four and drew one. Clark, however, remains adamant he can rescue the team from the relegation chop.

"I would not be here if I was not confident I can get the team out of the situation. I still think we have a talented squad.

"In many departments we have the experience. In those six games remaining we probably need 10 points to be safe. If we keep performing like this we will get them."

Clark's saving grace could come in the Nedbank Cup where they are in the quarterfinal. Lidoda Duvha could provide their coach with some breathing space if a win against neighbours Baroka on Saturday.

Lidoda Duvha slide to bottom of log.
Sport
2 years ago
Next Article