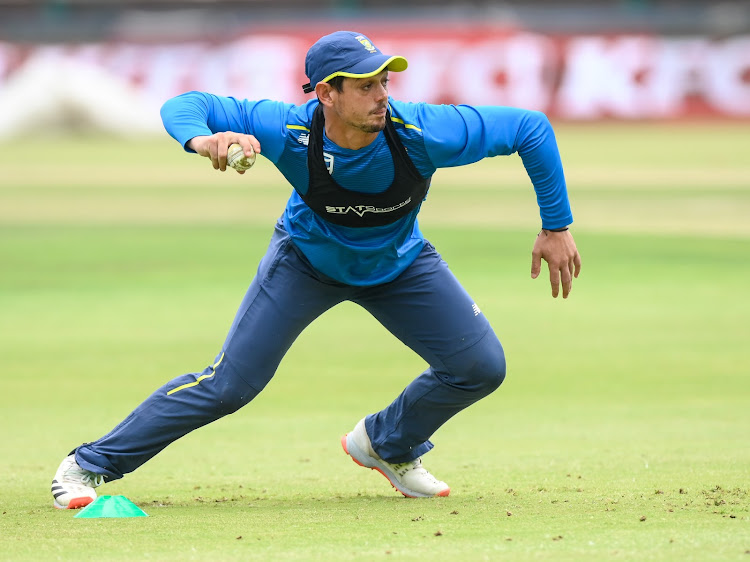 Proteas captain Quinton de Kock has a shy at the stumps during training in Johannesburg on February 20 2020.
Image: Christiaan Kotze/BackpagePix

New South Africa captain Quinton de Kock has welcomed the return to the One Day International squad of his predecessor Faf du Plessis as they prepare to meet India in Dharamsala on Thursday.

“Faf plays big role for us from a leadership point of view. He’s here to help out a lot of the younger guys in the team, and he still adds a lot of value to us and he also knows he has lot of value to give to this team,” De Kock told a news conference on the eve of the match.

“It’s still great to have him around. The experience he has picked up over the years will be a great help to us in this series.

“He’s been given a chance to have a break. I feel it was important for him to put his feet up for a little bit and regather his thoughts.” De Kock replaced Du Plessis as skipper of the ODI team for the three-match series against England, when Du Plessis was surprisingly left out in a clear signal that his tenure was headed to an end.

Du Plessis then quit as South Africa captain across all three formats of cricket, but said he would remain available for selection and after also being left out for the 3-0 home series win against Australia over the last fortnight, was restored to the squad for the three matches in India.

“We understand we have an inexperienced next side in these conditions, so it’s important that guys like me and Faf help lead the way,” added De Kock.

“India have become an unbelievable team but we are also coming here with a lot of confidence.” Thursday’s match in Dharamsala is followed by a meeting on Sunday in Lucknow and next Wednesday in Kolkata.