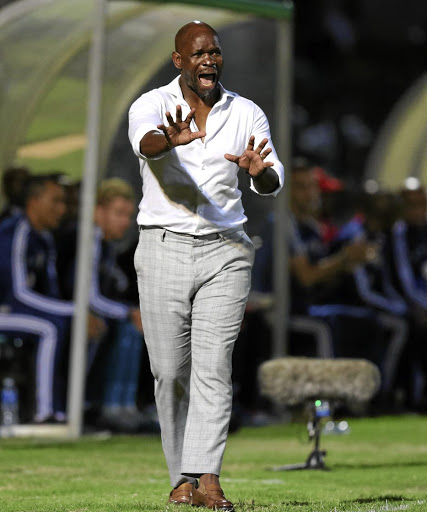 Cryptic Golden Arrows coach Steve Komphela has revealed he's identified a striker he wants to sign for the next season, intending to get one who can score at least a goal in two games.

While maintaining he still values his experienced strikers in Lerato Lamola and Knox Mutizwa, who's their top-scorer with 11 strikes, Komphela feels adding another sharpshooter to his squad can tremendously improve the team.

"Already we are thinking about next season. I am not pointing at Lamola or Mutizwa for their lack of depth; they've done a lot for us. But if you could have another prolific goal-scorer, things could change here [at Arrows]," said Komphela.

Komphela declared his desire to get another striker in the wake of their goalless stalemate against Orlando Pirates at the weekend.

"I do have one striker in my mind, but it's not as easy. you have to negotiate this, try this, try that, but there's [a striker targeted]," noted Komphela.

Bafana Bafana coach Molefi Ntseki has perhaps given the clearest indication yet that his upcoming squad announcement on Thursday could include some ...
Sport
2 years ago

"[Against Pirates] first half, there's a number of chances we got, we could've scored, second half again.

"Now, you're saying if you could get someone very aggressive and with a touch of goals, goals. a guy who would give you a goal a match or maybe a goal in two matches."

Having been brave enough to promote players from their Multichoice Diski Challenge (MDC) side, it's easy to guess that the striker Komphela is referring to is their Diski boy Nkosikhona Dube, who's leading the scoring charts with 20 goals in the reserve league.

However, Komphela poured cold water on the notion that Dube is the striker he wants for next term.

"MDC is a beautiful league that gives us players, but the PSL is another cart," said Komphela.

"In MDC you can top the scoring charts [but struggle in the PSL]. Look at [Siboniso] Conco at some stage he was something else, but playing in the first team isn't as easy. [Emmanuel] Letlotlo at Chiefs was topping, it's not easy."