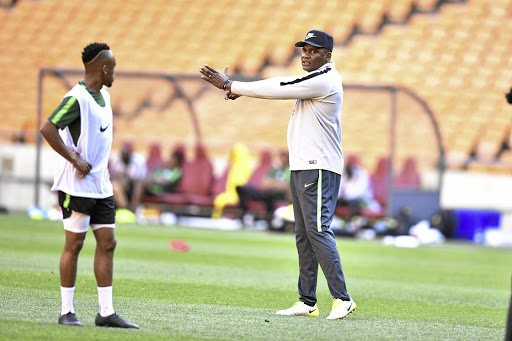 Bafana Bafana coach Molefi Ntseki has perhaps given the clearest indication yet that his upcoming squad announcement on Thursday could include some surprise names.

Ntseki is set to announce his squad to face Sao Tome at the end of the month in back-to- back qualifiers for the 2021 Africa Cup of Nations.

In the past few months, the Bafana boss has been doing a meet-and-greet with top-flight clubs. He has already visited Bloemfontein Celtic, Highlands Park, Golden Arrows and AmaZulu.

Last week, Ntseki took time to visit the Limpopo clubs and attended the derby between Baroka and Leopards.

"We are saying give every South African player a fair opportunity to play for Bafana. We profile them according to the qualities we are looking for. It's not that the best players are based overseas," Ntseki said. "We are giving local players hope and belief that they can play for their country. Every player has an opportunity"

Dylan Kerr positive Baroka will stay up after victory

Derby win over Leopards a big plus.
Sport
2 years ago

Keagan Dolly is back in training at French Ligue 1 side Montpellier and is just a few weeks away from being ready for first team action.
Sport
2 years ago

Ntseki, who served as assistant coach under Stuart Baxter, says during his tenure he wants a better relationship with local clubs.

"I came up with a programme to try to foster relationships with the players and the different clubs," he said.

"The programme of club visits runs until the end of the season, to have discussions with coaches and giving them an idea of what we are looking for.

"As the national team we depend on the clubs and the performance of the players."

A concern is that Safa has still not finalised the appointment of a technical team to support Ntseki. The mentor from Excelsior, Free State, appeared to suggest that they will continue with the same arrangement of temporary technical team members.

"We still have the technical adviser with Trott Moloto, assistant coach in Arthur Zwane and goalkeeper coach in Andre Arendse. But the idea is to beef up with technical heads that will be of help. It's not easy because most of our coaches are attached to clubs."

Players with outside chance of a national team call-up

The striker, 28, has been incredible for Usuthu this season, scoring 12 of the total 14 goals scored by the entire team.

The tricky winger, 24, has caught the eye of a number of top teams with his performances. He has scored six goals and provided six assists in 26 games for Lidoda Duvha.

Sibisi, 24, has been described by his coach Steve Komphela as "monstrous". The talented defender is a brilliant man-marker. He has started in 21 of the 23 league games.

The defender nicknamed "The Rock" has been solid for the Team of Choice. The 24-year-old has been touted as the next best thing. He has played every game this season.

Motupa, 25, can count himself as unfortunate for the number of times he has been overlooked for Bafana. He was among the top scorers in the past few seasons for Wits and this campaign has scored five in the league. Earlier in the CAF Champions League preliminaries he scored four goals against UD Songo.