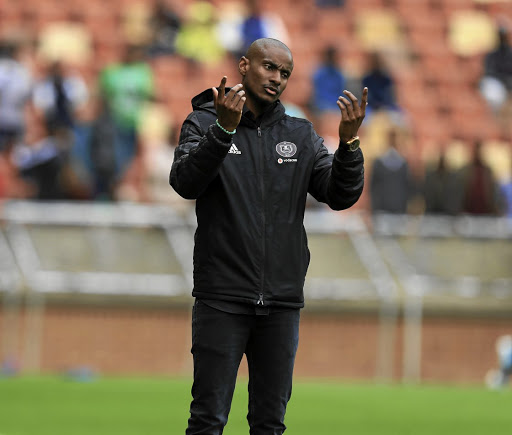 Rulani Mokwena has been appointed Chippa United coach until the end of the season. / Philip Maeta/Gallo Images

The 33-year-old former Orlando Pirates interim coach was yesterday revealed as the Chilli Boys' new mentor and he will be joined by Bucs' former MultiChoice Diski Challenge coach Michael Loftman as his assistant.

After having the wind knocked out of their sails by Mapeza's surprise resignation, Chippa will now place their faith in Mokwena to steer the ship forward.

Mzinzi said they had to act fast to find a worthy replacement for Mapeza and that Mokwena was the perfect fit.

"We had to be realistic, and we think that someone with Rulani's experience can help us," Mzinzi said.

"We don't need too many points. Our situation is not that bad but it's a situation that we do not take lightly.

Rulani Mokwena has surfaced at Chippa United after Orlando Pirates announced on Wednesday that their assistant coach had left the club to join the ...
Sport
1 year ago

"We take our brand and our PSL status very seriously. We don't think it would have been wise for us to bring someone who does not have experience in the PSL.

"Knowing Rulani ... he has coached in the highest level of PSL. He has worked with two top clubs at PSL level in Mamelodi Sundowns and Orlando Pirates.

"We are left with seven games, so it made sense for us to have someone who has PSL experience."

When asked to comment on his appointment, Mokwena said: "Yes, I can confirm that I am the new Chippa coach until the end of the season.

"I am not doing any interviews at the moment. I will be in PE tomorrow (today)."

Mokwena was in charge for 15 games as interim coach at the Buccaneers last year. But he went missing from the Pirates camp after the arrival of current head coach Josef Zinnbauer in December.

Mokwena is expected to be on the bench when Chippa face Wits in an Absa Premiership fixture at Bidvest Stadium on Saturday (8.15pm).