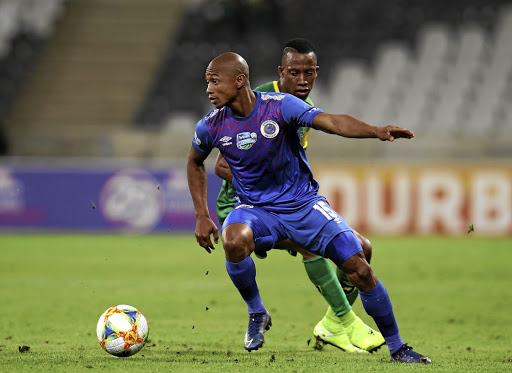 SuperSport United midfielder Thabo Qalinge has struggled for game time since he joined the club at the beginning of the season from Orlando Pirates. / Muzi Ntombela/BackpagePix

Thabo Qalinge has only seven matches to prove himself that he deserves a new contract at SuperSport United, according to CEO Stan Matthews.

The midfielder has struggled for game time since he joined the club at the beginning of the season from Orlando Pirates. The 28-year-old has only managed five appearances in all competitions, all coming on as a substitute.

With his one-year contract set to come to an end in May, Matthews said chances to renew his stay are slim unless he proves himself in the last seven matches of the season.

"We've got until May to exercise the option and at the moment, I can't take that because I haven't seen enough," Matthews explains.

Evans Rusike is likely to return to full training when SuperSport United get back from their Christmas holidays on Saturday‚ putting him in line to ...
Sport
2 years ago

"If you can say you have seen enough to decide to keep the player at the moment, we haven't seen that. The door is open for him but he needs to be playing and contributing to us winning and at the moment, he is not playing."

Matthews added that should Qalinge fail to improve in the remaining matches, he will be shown the exit door at the club.

"He's got seven games to show us what he can do, it was the same with (George) Lebese last year, I can bring players here if they want to play, and they have to put their hands up," Matthews added.

"[Mxolisi] Machupu last year scored goals and he put his hands up. I made the offer to Wits to keep him permanently (after his loan expired) and they turned me down.

"[But] I would love to keep Qalinge next year, he is someone who has been with us before and I like him a lot.

"But at the end of the day, a coach will decide to make that call in the next couple of months. I can only look from aside and say I have not seen enough myself to expect that Kaitano (Tembo) is going to tell me to keep Qalinge unless something changes in the remaining games."