Bradley Grobler vows to fight to the end for Golden Boot 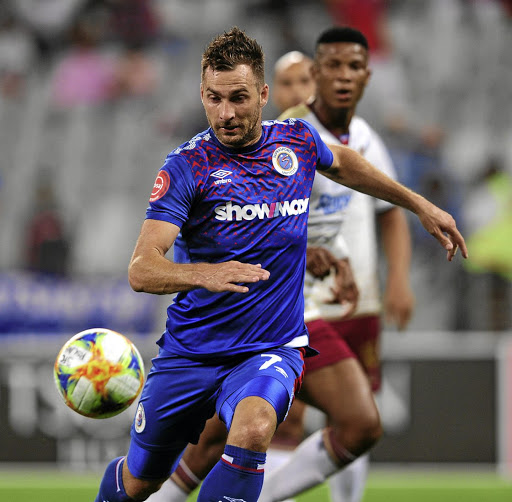 SuperSport United striker Bradley Grobler is enjoying one of his best seasons with Matsatsantsa a Pitori and hopes to be PSL top goalscorer this season. / Ryan Wilkisky/BackpagePix

Just like the Absa Premiership title race which has not been decided as yet, SuperSport striker Bradley Grobler feels the Golden Boot race is still there for the taking as well.

Grobler is joint third on 11 with Samir Nurkovic of Kaizer Chiefs, Golden Arrows' Knox Mutizwa and Bongi Ntulu of AmaZulu.

With three goals behind Mhango and seven matches to go before the end of the season, Grobler has vowed to fight until the end. "I think this is the same with the title chase, I think two or three games can change everything. If you get a brace or hat-trick it can change," Grobler said.

"For me right now, I'm just happy to have played so many games and I just want to carry on this way until the end of the season.

"I want to have a full season and I have played so many games, which I have not done in the previous seasons. So that's my main goal... to continue staying fit and finishing the season on a high.

Mamelodi Sundowns are making a push to sign Bradley Grobler from SuperSport United after failing to lure his teammate Aubrey Modiba to Chloorkop.
Sport
2 years ago

"If the goals come they come obviously, as a striker everyone wants to win the Golden Boot and score as many goals as I can ... that will be my target."

The 32-year-old striker is enjoying one of his best seasons with Matsatsantsa a Pitori having also made three assists. He added that his plan was to better the 2010/11 season where he scored 13 goals.

"My target during a pre-season was to play games week in and week out, things I have not done in the last few seasons. It was always my main target, I knew that as long as I'm fit I will score goals.

"I have never set a number but as it stands now, I think the most goals I finished within the league are 13, personally I have that target of beating that record that I got to myself. If I can do that it will be great."