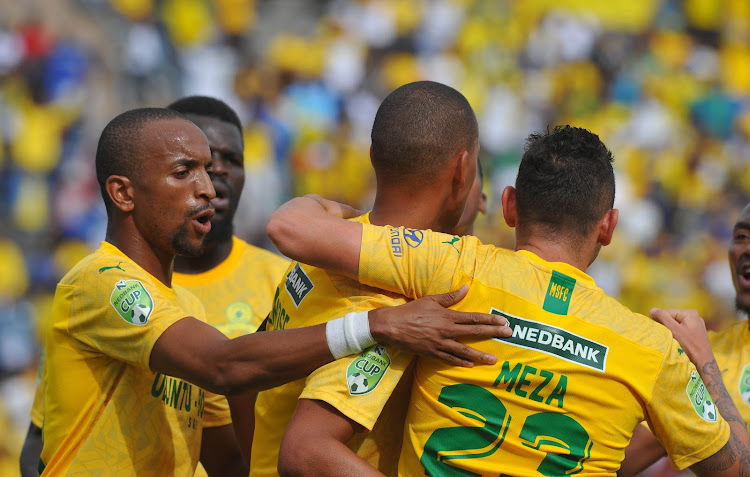 The importance of a positive first leg result for Mamelodi Sundowns in Saturday’s Caf Champions League quarterfinal against continental giants Al Ahly is revealed in the history books.

History also provides both sides with the chance to write a new chapter in what is likely to be a feisty encounter.

Sundowns coach Pitso Mosimane will no doubt be delighted with a draw at the Cairo International Stadium‚ given both his side’s strong home form and the fact that Ahly have always battled in South Africa.

He compared Ahly’s record this season to that of Real Madrid and Barcelona‚ and says the Egyptian side have outshone both in their 16-game winning run at the start of the Egyptian Premier League season.

A win on Saturday would leave the Brazilians feeling like they have one foot firmly in the semifinals‚ but in order to record that they will have to achieve something they have never managed before.

Sundowns have lost in all three previous visits to Ahly‚ and have in fact yet to score a goal in Egypt against the Red Devils.

That includes a 3-0 reversal in the final of the 2001 Champions League‚ even if they were unlucky on that particular night‚ a 2-0 loss in 2007 and a 1-0 defeat just last season.

The latter result should be read in the context of their 5-0 thrashing of Ahly in the first leg though‚ at the same quarterfinal stage‚ which meant Downs’ path to the semis was already assured.

That incredible success is the only win for the Brazilians in six previous meetings home or away against the Red Devils. Sundowns‚ though‚ also enjoy an unbeaten home record against Ahly‚ who have in fact never won in their 10 previous visits to South Africa in various Caf competitions‚ even suffering a surprise defeat to Platinum Stars in 2008.

Mosimane believes that the manner of the win in the first leg last season will leave Ahly baying for revenge.

“We’re playing against the Club of the Century and the fact that we beat them 5-0 will make it more difficult for us‚” Mosimane said in Cairo.

“Yes‚ winning 5-0 won’t put extra pressure on us but it will make it more difficult. This result will never happen again‚ especially against a side with Al Ahly’s form.

“The pressure might be on Al Ahly‚ who will try to win by a big margin in Cairo. We’re coming up against them at the worst time as they beat every team they faced in the [Egyptian] league‚ scoring 40 goals and conceding only three goals.

“Even Real Madrid and Barcelona don’t reach these stats. We respect Al Ahly but we came here to qualify for the next round.”

There has been some controversy in the Egyptian press about the decision to play the return leg in Pretoria in the afternoon heat‚ but Mosimane has batted this away.

“Al Ahly will host us at night‚ so why is there a controversy around playing the second leg in the afternoon?” he asked.

“We played against Esperance and Wydad at night so why do you mind if we play at three in the afternoon?”

Mosimane added that while Ahly have a new coach in Swiss national René Weiler‚ he knows most of the players from their encounters last season.

“Al Ahly have only changed their manager but the players remain the same such as Amr Solaya‚ Hussein El-Shahat‚ Marwan Mohsen and Junior Ajayi‚” Mosimane said.

“No African team can say they can easily beat Al Ahly in Egypt. If we expect to win in Cairo we will concede five goals.

“We have an injured player on the right side [Thapelo Morena]‚ much like Al Ahly who won’t have Junior Ajayi or Ali Maaloul‚” he added.