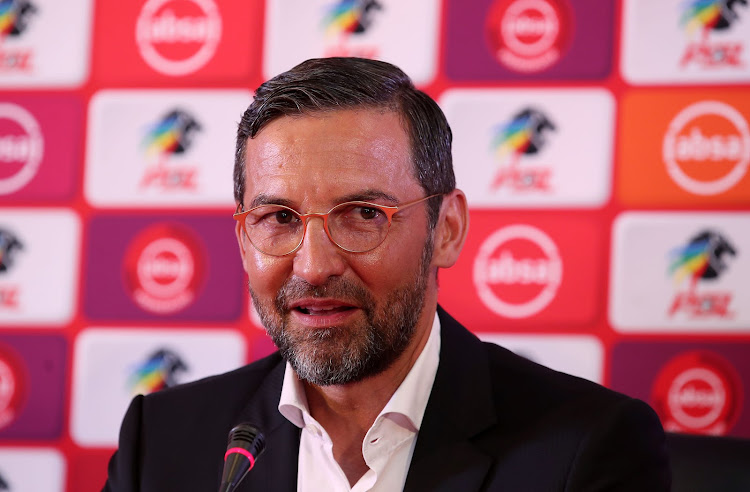 Josef Zinnbauer, coach of Orlando Pirates during the Absa Premiership 2019/20 Coach and Player of the Month at the PSL Offices, Johannesburg on the 13 February 2020.
Image: ©Muzi Ntombela/BackpagePix

Orlando Pirates assistant-coach Fadlu Davids has said the two Germans taking charge of Saturday’s Soweto derby at FNB Stadium are from the same football school‚ but “completely different in personality”.

Apart from having worked with Zinnbauer since the former Karlsruher SC coach’s arrival on December 10‚ and subsequent remarkable unbeaten streak of seven league victories and a draw‚ Middendorp was Davids’s earliest coaching mentor.

Middendorp brought his ex-striker at Maritzburg United into top-flight coaching – as the German’s assistant at Bloemfontein Celtic and Maritzburg. Davids later successfully was head coach of United‚ before being poached by Pirates.

“I think in terms of football school‚ they both come out of the same German school where a lot is focused on verticality and counterattacks‚” Davids said‚ asked to compare the younger Zinnbauer (49) and Middendorp (61).

“So the football thinking and approach are quite similar. Of course Ernst has changed over the years since I played under him‚ and then started to work with him. He’s always kept up with the latest trends.

"But both with a strong will to win everything – from an exercise in a training session to everything they do. If they are playing a card game they want to win.

“But you cannot compare the two. Both good coaches. But completely different.

“When it comes to the football sense they both have their [Uefa] Pro Licences out of the same football school in Germany.

“But both wanting the same outcome‚ which is of course to win a football match. That’s where you cannot set them apart – they both have that desire to win.”

Middendorp has steered Chiefs to the top of the PSL having finished ninth last season.

In the past fortnight some of the pressure of Chiefs trying to reverse four seasons without a trophy in their 50th anniversary campaign has appeared to show‚ as they had their lead cut from nine to four points.

They need a win against Pirates to maintain a four-point buffer over second-placed defending champions Mamelodi Sundowns.

A win for Bucs can reduce their gap to three points‚ having played a game more than Chiefs‚ and establish genuine title credentials for a team who floundered in the first half of the season.