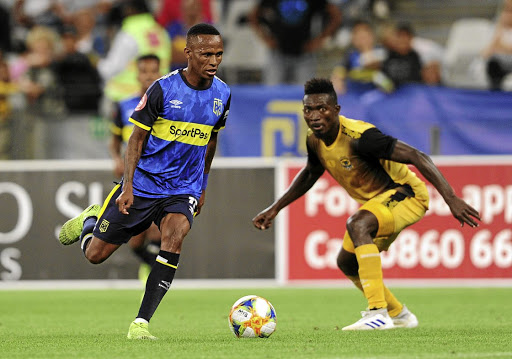 Surprise Ralani of Cape Town City, left, feels that he is giving more than enough in his club football to deserve a call-up to the national team. / Ryan Wilkisky / BackpagePix

In-form Cape Town City attacking-midfielder Bradley Ralani feels he has been overlooked by the Bafana Bafana selectors over the years.

In a season where City are inconsistent, Ralani has been outstanding and has hardly put a foot wrong since joining them two seasons ago from Swedish side Helsingborg IF.

In 20 games he has played this campaign, the 32-year-old has scored two goals and made seven assists, one behind joint-leaders Iqraam Rayners of Stellenbosch and Kaizer Chiefs' Lebogang Manyama.

"If you go back and look at my seasons, I have incredible stats - all the years I have been playing abroad and here at home," Ralani told Sowetan yesterday.

"But no one has ever spoken to me, not even a single Bafana Bafana coach or give me a chance to come and train.

There is a consistent theme being trotted out by Cape Town City players over the past few weeks suggesting that the heart‚ soul and inspiration of ...
Sport
2 years ago

BidVest Wits failed to make up ground on Absa Premiership leaders Kaizer Chiefs when they were beaten 2-0 by Cape Town City at a wind-swept Cape Town ...
Sport
2 years ago

"If you give players who score two goals chances then I don't know what criteria they were using to choose players for the national team. Maybe I don't fit in the style of play... I don't know."

With age now not on his side anymore, the Kimberley lad has all, but given up on playing for Bafana in the future.

"If you look at upcoming young players, it won't be fair for me to come and play at this age only for a year or so while there are players who can be given a chance to grow in the national team."

Ralani is reluctant to take credit as the Citizens have been struggling this season, occupying the 11th spot in the Absa Premiership.

"Everything should not be about me because what I'm doing is to help the team. In a position we are, not to be able to win any silverware this season is not for Cape Town City. But I'm not downplaying what I have done, at the same time, it would have been nice if what I have done was going to put a team in the good position," Ralani stated.

"It still feels good because if you look at the stats, you could say yeah, I have put in the work. But it would have been better if the team was doing well."