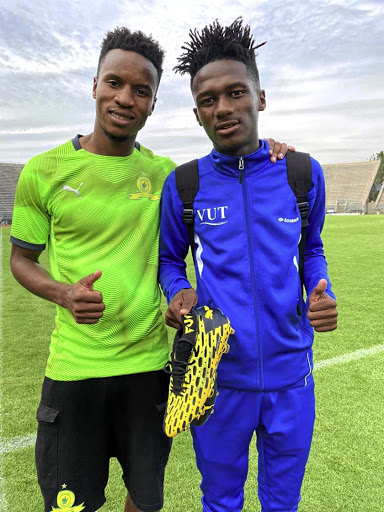 Vaal University of Technology midfielder Bokang Madiehe feels like he hit the jackpot despite his team's elimination from the Nedbank Cup.

The 20-year-old from Kliptown, Soweto, says he had long been a fan of Downs dribbling wizard and after the game he seized his opportunity.

"I planned this long ago. I told myself that if one day I got a chance to meet him I will ask him for his boots. So after the game I approached him and asked him for them. He just told me to wait for him after going into the change rooms," Madiehe told Sowetan.

"I am very happy to get his boots. I have waited long for this day. I won't play with these boots because they will get worn out. I will put them in my room somewhere and hold onto them forever. Mshishi is my role model. I look up to him. For me he is by far the best player in the country."

VUT held their own against Downs who laboured to get a 2-0 win over them in Atteridgeville. Second-half goals from Wayne Arendse and Phakamani Mahlambi gave the 2016 African champions a sigh of relief.

Many onlookers expected the amateur fourth-tier side to get hammered with a huge losing margin against the defending Absa Premiership champions.

The policing student at VUT was delighted that the amateur team proved their doubters wrong.

"I feel very proud of my team. It's not everyone who gets to experience something like this.

"We are just students who are passionate about football and we got to play the biggest team in the country.

"Holding Sundowns for the first half and to only lose by two goals is a wonderful achievement.

"Many people were fearful, thinking we would get a similar scoreline like Powerlines who lost [to Downs] by 24 goals [in 2012]."

VUT will now go back to SAB Regional League where they are seventh with 20 points with four games in hand.