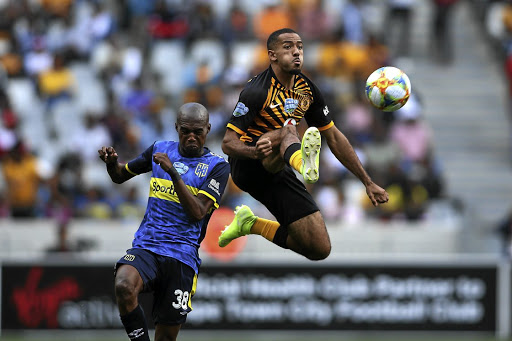 Reeve Frosler believes nothing will stop Chiefs from winning both the league and Nedbank Cup this season. / Gallo Images
Image: Gallo Images

Kaizer Chiefs defender Reeve Frosler has a strong feeling Amakhosi can win both the league and the Nedbank Cup.

Facing Highlands Park in the Ke Yona Cup quarterfinal at Makhulong Stadium tomorrow (3pm), Chiefs hope to bounce back from their last weekend's home defeat to Maritzburg United that saw them slightly lose ground in the title run-in.

After 20 games, the Glamour Boys are still top of the standings on 45 points, four ahead of second-placed Mamelodi Sundowns, while Orlando Pirates, who have played a game more, are third and one point behind the Brazilians.

Despite their slip-up at the hands of the Team of Choice and the recent upturn in form of fellow title challengers, Frosler remains optimistic about winning the league. The right-back has also set his sights on the Cup.

Reeve Frosler happy with tactics employed by Kaizer Chiefs: 'You stick to what you know'

Middendorp not saving trio on yellow cards for derby

Kaizer Chiefs coach Ernst Middendorp is prepared to risk not having his influential trio of Daniel Cardoso, Lebogang Manyama and Reeve Frosler in ...
Sport
1 year ago

"What happened last Saturday is in the past now. From now on, we aim to win each and every game we play, whether it will be the league, the Nedbank and friendly matches," said Frosler, who won the league title with Wits in the 2016/17 campaign.

"Our main objective is to bring cups to our cabinet, it's been a while [they've gone five years without silverware]. Now with the league and Nedbank Cup, we have a good chance to bring success. I am positive we can do it [win both the league and the Ke Yona trophy], we have hunger as a team, but as always, we take one game at a time."

As their visit to the Lions of the North has been confirmed as a sold-out affair, Frosler couldn't hide his excitement over playing in front of a packed stadium.

"It's always nice to play in front of a big crowd, it gives us that extra motivation to want to do better, knowing that the crowd is with us," said the Amakhosi star.