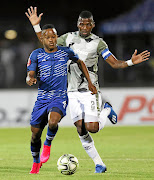 Tebogo Tlolane has attributed his early resurgence at Maritzburg United to the relationship he shares with coach Eric Tinkler, having worked under him previously at Chippa United.

Tlolane secured a six-month loan move to the Team of Choice in January from Orlando Pirates. The versatile player has since made five appearances for Maritzburg.

"I worked with coach Eric before and I always had an eye for this team from the time Fortune [Makaringe] and [Siphesihle] Ndlovu were still playing here [at Maritzburg].

"When I was given a chance to come here, I was very happy and it was a very easy decision to make. I didn't think twice."

Tlolane only had nine minutes of action during his stay at Pirates. He added that he has put aside his disappointment of not playing at Bucs to focus on the job at hand.

"It didn't discourage me... not playing at Pirates, there was times when confidence dropped a bit obviously, having only played one game against AmaZulu, which wasn't a lot of game time.

"But in football, you will never know when your time is coming. Coming here is not about Pirates but Maritzburg.

"I'm happy that I'm getting some game time and looking forward to give back to the team."