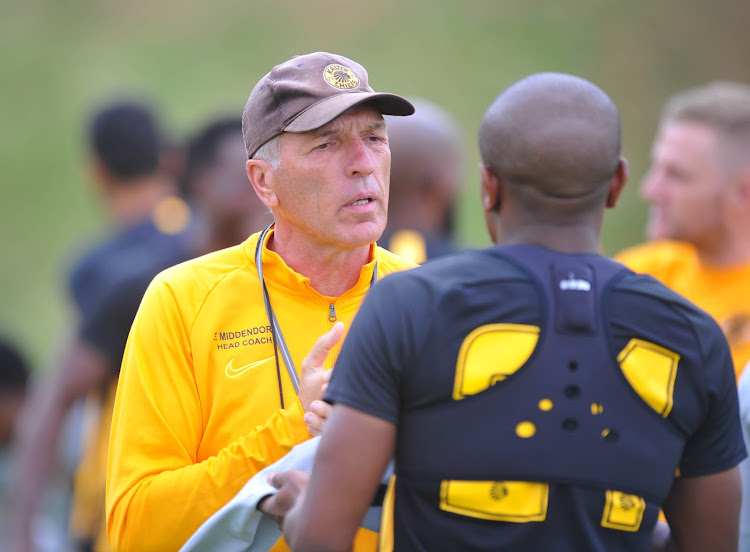 Ernst Middendorp with playmaker Lebogang Manyama during a training session at Naturena in the south of Johannesburg on February 19 2020.
Image: Sydney Mahlangu/BackpagePix

Ernst Middendorp says he intends to field all the players sitting on three yellow cards when Kaizer Chiefs face Highlands Park in the Last 16 of the Nedbank Cup on Saturday afternoon.

Chiefs right-back Reeve Frosler‚ center-back Daniel Cardoso and attacking midfielder Lebogang Manyama are all on three yellow cards and could be ruled out of next week's Soweto derby against Orlando Pirates if they are booked against Highlands.

Middendorp‚ though‚ said he would not prioritise the derby over the Cup match.

“Reeve Frosler‚ Daniel Cardoso and Lebogang Manyama‚ they will all be on the field (against Highlands). They should behave. They should do their normal job.

"They are important‚” said Middendorp.

“Our next performance is the important one and that is on the 22nd of February against Highlands Park. Nothing else!” he said.

Manyama‚ in particular‚ has been a crucial player for Chiefs as their set-piece taker.

The German coach said he trusts in his team’s depth in case the former 2016/2017 PSL Footballer of the Season picks up another yellow card and is ruled out of the derby.

“George Maluleka‚ Bernard Parker‚ Reeve Frosler can do the execution.”

Amakhosi will face Highlands for the third time this season after defeating them home and away in the league in a 3-0 thumping and a thrilling 3-2 entertainer on the opening day of the season.

Steve Komphela says the winner of this year’s Premier Soccer League title will be the team with the strongest mind and toughest resolve.
Sport
1 year ago
Next Article