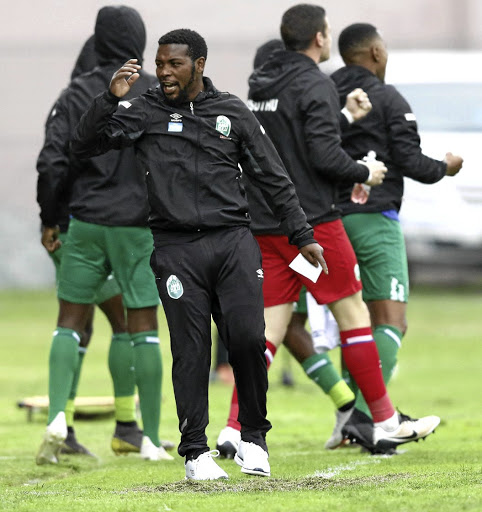 "Mabhuti is a hard worker and a winner by nature. I foresee him doing well at Galaxy. His hunger and drive will carry him through. I wish him nothing but the best," Johnson told Sowetan yesterday.

In a turn of events that may have amazed many, Galaxy confirmed Khenyeza as their new head coach at the weekend, replacing Dan Malesela, who resigned two weeks ago.

What made Khenyeza's appointment a surprise is that club chair Tim Sukazi had told Sowetan last week he was in no rush to replace Malesela, insisting Muisi Ajao and Esau Mtsweni were going to finish the season as co-coaches on an interim basis.

Khenyeza joined the second-tier side from Usuthu, where he was Jozef Vukusic's second-in-command.

The 37-year-old retired striker was on the bench for AmaZulu's 2-1 defeat by Golden Arrows on Saturday.

With AmaZulu languishing bottom of the top-flight log, it seems like Khenyeza's departure has left a sour taste in the mouth of the outfit's manager, Lunga Sokhela, after revealing their former deputy coach resigned via a WhatsApp message.

AmaZulu coach Vukusic has no intention of quitting the ailing club: 'I’m staying. I am a fighter'

AmaZulu coach Josef Vukusic refused to label the dire situation at his club a crisis‚ even after they dropped down into last place in the Premiership ...
Sport
1 year ago

"The timing of Mabhuti's resignation is quite unfortunate given the club's situation in the league.

"We were due to meet in the morning [on Sunday] with the rest of the technical team but have instead received his resignation letter [via] WhatsApp," said Sokhela.

"In Khenyeza, we've found a highly driven and passionate young coach who comes with lots of playing experience.

"He is a strong character who has great hunger for success," said Sukazi on his club's website.

It's not the first time Khenyeza leaves AmaZulu unexpectedly, having done the same last season when he was snatched up by Muhsin Ertugral to be his assistant at Maritzburg United after hanging up his boots.