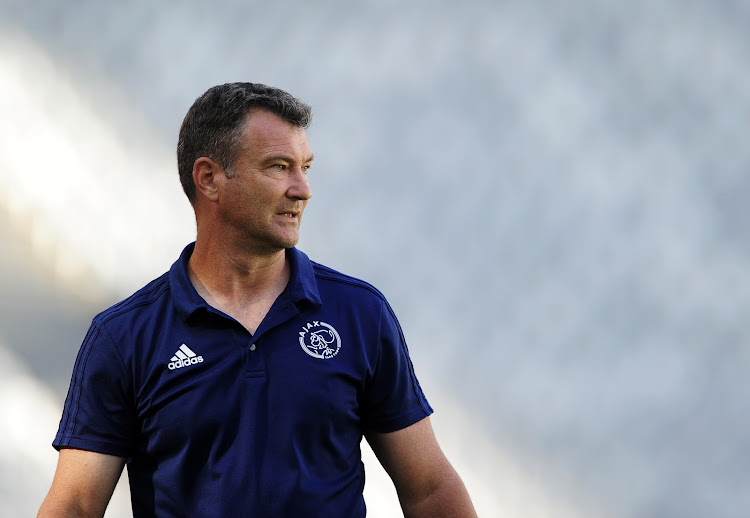 Calvin Marlin is the new caretaker coach at Ajax Cape Town until the end of the season.
Image: Ryan Wilkisky/BackpagePix

Ajax Cape Town have opened up a five point lead at the head of GladAfrica Championship and are now setting their sights on wrapping up the title – and automatic promotion – as quickly as possible after bouncing back from a month of internal disruptions.

A come-from-behind 2-1 win over Real Kings at the Cape Town Stadium on Monday means Ajax are sitting in a pretty position with nine games to play – six of them in Cape Town and just three more trips north.

“The further we can get away from the other clubs the better‚” said caretaker coach Calvin Marlin‚ who won his first game after taking over in the wake of the walk out of technical director Hans Vonk and Dutch coach Andries Ulderink.

The pair were involved in a major showdown with co-owner Ari Efstathiou‚ whose relationship with his Amsterdam partners is on shaky ground.

“We have kept the same platform‚ the same work we were doing when the previous coach was here‚ we are not changing anything‚” said Marlin‚ who will stay in charge for the rest of the campaign.

“We mustn’t lose sight of what we have achieved so far this season. It’s been a long campaign already and we’ve had to work really hard for a lot of these points.

“It’s a good group of boys‚ we have very little egos there in the changeroom. It’s question of keeping focus on the ultimate goal.”

Ajax‚ who were relegated two seasons ago and narrowly missed out on the promotion playoff last campaign‚ are next away at Jomo Cosmos in a fortnight’s time but Marlin says their key game is likely against third played Moroka Swallows.

“They haven’t lost in their last eight games and they could be our biggest headache.

“But we’ve first got to get as many points we can from the other teams we play before them and then we can worry about dealing with them.

“This league is the same at the PSL. The bottom side can beat the top side. There is no guarantee of points from any game. It’s always been the case in this league.

“Cosmos next in Potchefstroom is not going to be easy. Jomo is fighting relegation. Winning the league is all we want‚ there is no talk of second or third.

“We are confident we can hold onto top spot although nine games to play is still a long way to go. There are still a lot of points to play for.”