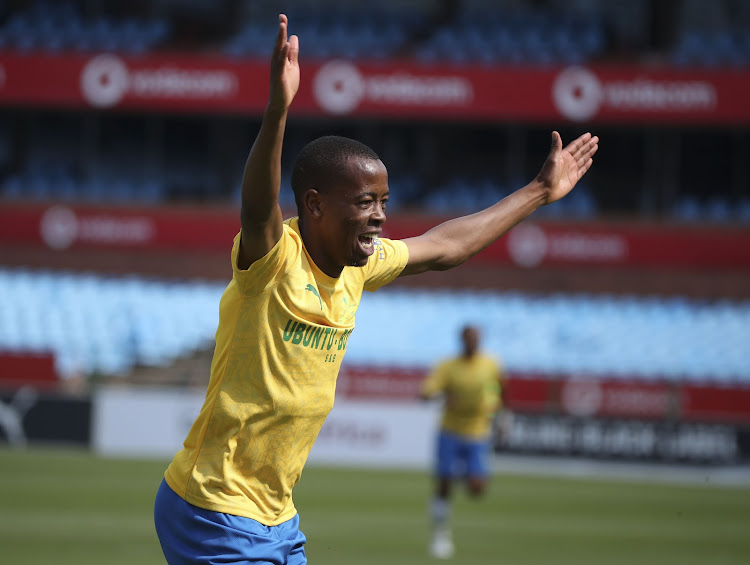 Nicholus Lukhubeni celebrates after scoring in a 3-0 Absa Premiership win over Chippa United at Loftus on February 15 2020.
Image: Gavin Barker/BackpagePix

Novice right-back Nicholus Lukhubeni delivered an eye-catching performance for Mamelodi Sundowns in a league match against Chippa United at the weekend and coach Pitso Mosimane says the defender has given him a pleasant selection headache.

Lukhubeni‚ who was playing in his second start and third official league match for the Sundowns‚ was thrown into the deep end by Mosimane in the absence of injured veteran Anele Ngcongca and did not disappoint.

He produced a confidence-boosting man-of-the-match performance that endeared him to the hard-to-please supporters of the club.

Lukhubeni got proceedings going at Loftus on Saturday with a brilliant solo goal after just two minutes as Sundowns went on to beat Chippa 3-0 to keep leaders Kaizer Chiefs in their sights.

“His performance was good‚ it was safe and he kept it easy‚” said Mosimane who also admitted that the 23-year-old still has a lot to learn.

“We kept on talking to him a lot‚ I don’t know if you saw that.

"We were on his case a lot on our side because sometimes he allowed the distance between him and the guy who was going to cross the ball to grow bigger.

"It is positioning and that takes time‚ it is the Anele’s‚ the Langerman’s and Thapelo’s who understand those things because they are experienced but we must give him a break.”

After the match‚ Lukhubeni said he was excited to get a man-of-the-match award in his second start for the Brazilians.

“It was a stupendous moment to get the man-of-the-match accolade for my team and also getting my first goal on my second start.”

If Ngcongca does not respond well to treatment this week‚ Lukhubeni will be in line for his second successive senior start and fourth appearance overall in the colours of the Brazilians.