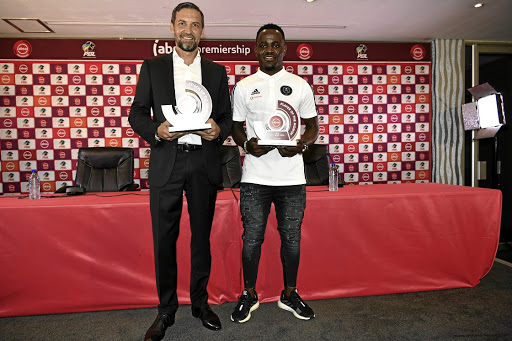 After being sorely missed in the previous game due to suspension, free-scoring striker Gabadinho Mhango is pleased to be back for Orlando Pirates.

Mhango was unavailable for the dramatic Nedbank Cup last 32 clash against Bidvest Wits that Bucs lost in a penalty shootout.

The Malawian international is now back for the team as they look to catch up with leaders Kaizer Chiefs in the league race. He was named Player of the Month for January yesterday.

Pirates take on Black Leopards at the Thohoyandou Stadium on Sunday (3.30pm).

"It's good being back," he exclaimed. "It was not easy to watch the game from the stands. It was sad for me because it's a cup and to go to the next round we had to win.

"It was bad but it's gone, so we should just look at the next game. I think I have learned my mistakes and it won't happen again (suspension)."

Bucs can ill-afford to drop points as they are nine points behind Chiefs.

But collecting points will be a difficult preposition in the scorching Venda heat.

"It won't be an easy game [against Leopards] but as a team we just have to get the points," he said.

"Right now there is nothing else we are playing for, it's just the league. We need to take each and every game as it comes."

Pirates have been in spectacular form in the league under coach Joseph Zinnbauer as they are unbeaten with six wins and a draw under the German.

Before the arrival of Zinnbauer, the Soweto giants had not been able to muster two wins in a row under Milutin Sredojevic and Rulani Mokwena. Currently, they are on a five-match winning streak in the league, with Mhango the overall league top scorer with 14 goals.

"I think it is something we have been looking at because we couldn't win two games in a row in the first round of the season.

"After winning two games then we pushed ourselves and we were able to win a third game and so on. We told ourselves as players that we need to pull our socks up and fight for a second win."