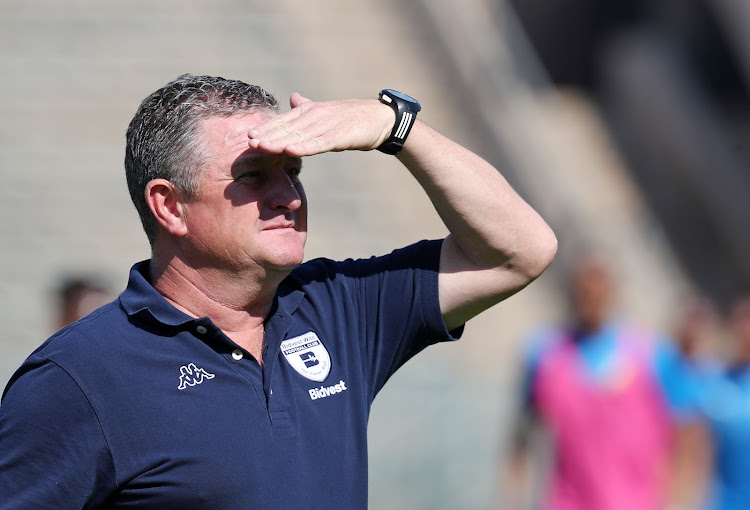 Gavin Hunt will have to improve the form of his team at their Bidvest Stadium venue if they are to catch up with leader Kaizer Chiefs.
Image: Muzi Ntombela/BackpagePix

Bidvest Wits coach Gavin Hunt played down his team’s tough scheduling going into the game after they lost 1-0 to Maritzburg United in a blow to their Absa Premiership title ambitions at Bidvest Stadium on Wednesday night.

Hunt‚ not always one to hold back on an opportunity to complain‚ ruefully said of his team’s big schedule of catch-up in fixtures‚ and of their two days’ less rest than Maritzburg: “It is what it is.”

A gamble for coach Eric Tinkler‚ who says the KwaZulu-Natal team’s emphasis is on a high finish in the league‚ of resting some players‚ paid off for Maritzburg.

Hunt could not afford to rest players in Wits’ big Nedbank clash against Orlando Pirates on Sunday.

Then it also did not help Wits that an energy-sapping 3-3 thriller was played over 120 minutes before the Clever Boys won on penalties.

Hunt rested some key players against Maritzburg‚ and the visiting team‚ back at full strength‚ also did appear to have a fresher spring in their step of the two teams on the night.

“We made three or four changes to try to give us a little bit more impetus‚ a bit more energy. It didn’t help.”

“If we’d played Friday or Saturday we’d have had that extra day [or two]. But it is what it is.

“It [the effects of the scheduling‚ and grueling match on Sunday] showed certainly. But I mean‚ we finished strong.

“We couldn’t get in there. You’ve got to commend Maritzburg’s defensive display – you know‚ they sat in there.

“But you’ve got to unlock them somehow‚ and we didn’t.”

Hunt rested key players Thabang Monare in midfield and star winger Deon Hotto‚ who were both on the bench. Captain Thulani Hlatshwayo was suspended.

Wits remain theoretically in contention for the league title. But they have to turn a number of catch-up games – arising form their run to the Caf Confederation Cup group stages – into points.

Sukazi has faith in Ajao and Mtsweni
Sport
2 years ago

Former Orlando Pirates midfielder Joseph Makhanya believes Luvuyo Memela deserves as much praise for the team's revival in the league.
Sport
2 years ago
Next Article