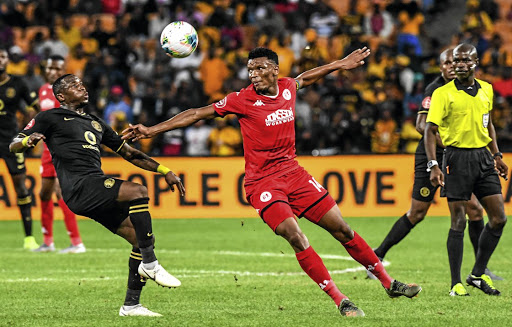 George Maluleka of Kaizer Chiefs and Mothobi Mvala of Highlands Park. Mvala could be back in action against Bloem Celtic on Saturday.
Image: Sydney Seshibedi / Gallo Images

Mothobi Mvala is itching for action, but the truth is, he is likely to keep watching from the Makhulong Stadium stands on Saturday afternoon, when his teammates face Bloemfontein Celtic in an Absa Premiership fixture.

The Highlands Park man has been dealing with a knee injury and was stretchered off the pitch a minute before half time two weeks ago, when the Lions of the North narrowly beat Baroka 1-0 at home.

The 25-year-old hard-tackling midfielder from the Free State missed action last week when Highlands eliminated Uthongathi from the Nedbank Cup by a 2-0 margin - courtesy of a Peter Shalulile's brace. Placed eighth on the standings, Highlands will welcome ninth- placed Siwelele on Saturday, and Mvala could again follow the action from stands.

Like any other player who wants to perform on the field of play, he wants some of that action on Saturday, but the final decision is in the hands of the medical staff handling his situation. "The doctor said I tore ligaments in the knee, but it is not bad," he said. "I trained with the club yesterday and it felt good. I hope to be back in action soon."

Celtic will go into the game basking in glory after ruthlessly hammering AmaZulu 4-1 in Nedbank Cup last weekend.

Highlands Park central midfielder Mothobi Mvala says he is not intimidated by the quality and fierce competition for places in the Bafana Bafana ...
Sport
2 years ago
Next Article