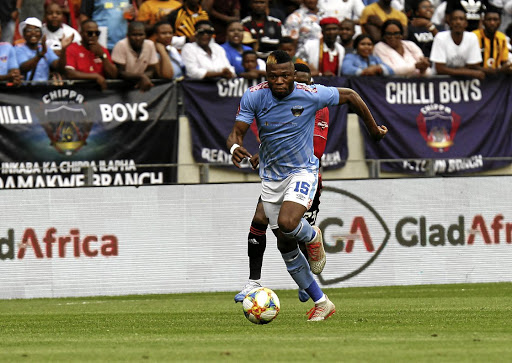 Augustine Kwem of Chippa United wants to inspire youngsters not to give up their dream of plying their trade in the big league./Michael Sheehan / Gallo Images

Chippa United marksman Augustine Kwem wants aspiring players from lower leagues who are eager to make it to the top-flight to draw inspiration from his career.

Before scoring a top-flight contract at Chippa last July, Kwem had to earn his stripes in the third-tier of SA football, where he turned out for three clubs - Polokwane City Rovers, Mthatha Bucks and Sibanye.

It's because of this that the Nigerian striker urges players from lower leagues, who want to crack it in the premiership, to source motivation from his own football journey.

"I have been around [in SA] for two years, playing for Motsepe League teams. When I first came to SA, it was October 2018 and [the] transfer window was closed, so I trained with University of Johannesburg (UJ)," the 22-year-old Kwem told Sowetan.

"Then I joined City Rovers, played for several months there and moved to Bucks, started the season with them, but I switched to Sibanye towards the end of the season. I so wish that aspiring players from smaller leagues can learn from my journey."

Kwem, who has since netted six goals in 15 outings across all competitions, was signed by then Chilli Boys coach Clinton Larsen after scouting him while playing for Sibanye in the Motsepe League.

"Larsen was the one who spotted me at Sibanye. he then invited me for trials and he liked me. So that's how I joined Chippa," said Kwem, who came to SA after parting ways with Israeli club Beitar Jerusalem's Under-19 side.

"If you have targets and determination, nothing can stop you. I kept on moving from club to club, took my bags and left Polokwane travelling by bus down to the Eastern Cape."

Chippa are 12th on the table with 22 points, two away from the relegation zone after 21 games. Feeling he's found his mojo, Kwem is optimistic the Chilli Boys will survive.

"Now I want to keep on scoring because I have found that form. I' m positive that we'll beat relegation," Kwem stated.