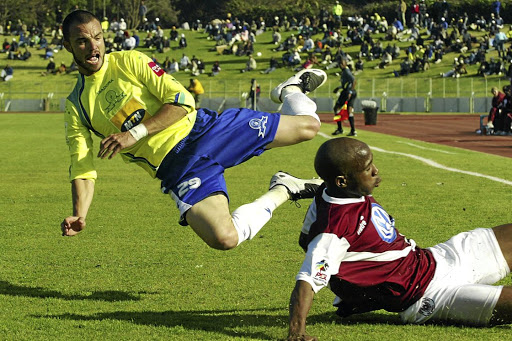 Former Mamelodi Sundowns winger Dillon Sheppard has shared some words of advice with Thapelo Morena about how to overcome his career-threatening injury.

Morena suffered a horrific injury recently where he fractured his ankle and damaged ligaments. The 26-year-old will miss the remainder of the season.

Sheppard knows a thing or two about horrific injuries as he also had an awful leg break in 2007 while playing for Sundowns against Free State Stars.

"The main thing for Thapelo is to keep mentally strong. I'm sure that physically he won't have a problem recovering, so the mental aspect is very important," Sheppard told Sowetan.

"I know what it's like because every day you wake up and you're in pain and are wondering if you will ever play again. The road to recovery is quite long, so and it's all in the mind. He should just remain positive."

Sheppard recovered from his injury and played for four teams after leaving Sundowns in 2009. The 40-year-old has backed Morena to come back stronger. "I was blessed to play 10 more years after my injury but obviously I never got close to my best again," he said.

"There is no reason why Thapelo can't come back better and stronger."

Morena has received messages of support and encouragement from friends and foe alike. Downs' CAF Champions League rivals Wydad Casablanca even posted a video where their players shared words of comfort with the player.

"I would like to thank each and every one who sent me recovery messages. Special thanks to all the football fans from Sundowns, the African continent and all football lovers. I will be back and I'll be back stronger," Morena said in a video on social media.

Other players who have recovered from career-threatening injuries

Sibusiso Vilakazi - Vila suffered an Achilles injury in October 2018, but was back in April 2019.

Morgan Gould - the defender suffered an Achilles tendon rapture in 2012, but has since played for SuperSport and now Stellenbosch, at 36.

Rivaldo Coetzee - his uncommon foot kept him sidelined for up to 15 months. After signing with Sundowns in August 2017, he only made his debut in November 2018. Now he is sidelined by ankle injury.

Happy Jele - a knee injury in 2011 kept him out of the game for a year, but he came back and is still a big part of Pirates.

Ex-soccer star Ryan Botha: 'I heard my leg break as I landed'

Ryan Botha‚ former Moroka Swallows midfielder, risked his own life to save a tourist who took a life-threatening tumble at a party and celebrated the ...
Entertainment
4 years ago
Next Article