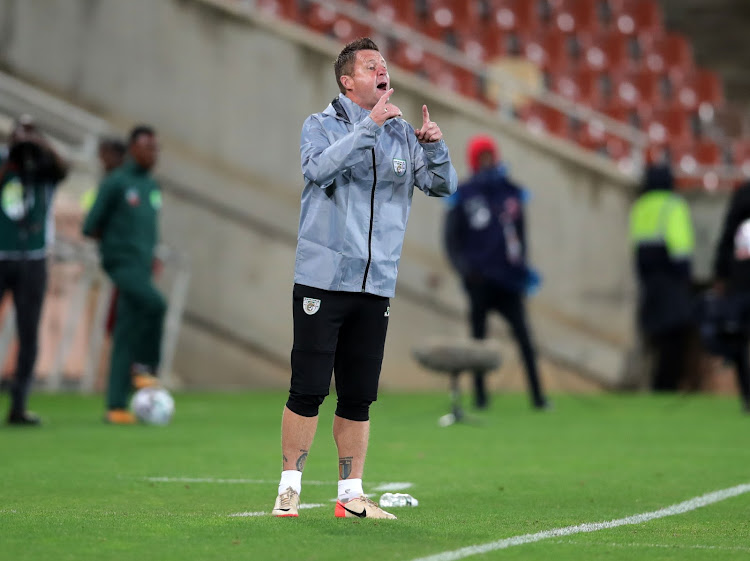 Dylan Kerr is confident he can save the struggling Limpopo club but says needs a more time to turn things around.
Image: Samuel Shivambu/BackpagePix

Baroka FC coach Dylan Kerr says he is under pressure to keep the club in the Premiership and needs more time.

The struggling Limpopo side beat Polokwane City 1-0 in the Last 32 of the Nedback Cup on Tuesday night but it is the side's form in the league that is a worry to Kerr.

The side from Ga-Mphahlele are currently languishing in 13th place on the standings‚ with 20 points from the 21 matches they have played this season.

“I have been here six weeks. Everybody thinks I am going to perform miracles. I can only perform miracles if my team listens‚ learns‚ and puts into practice what we do daily at games.

"The fighting spirit and attitude of not wanting to lose from the players in training is a different class.

"If I can just get them to replicate that on the field. It takes time. You know in Africa‚ you don’t have time. It’s all about results in Africa‚” stressed Kerr.

“How long had Jürgen Klopp been at Liverpool before he won the Premiership? How long was Pep [Pep Guardiola] at Barcelona before he won La Liga?

“Nobody gives you that opportunity to show what you can achieve in a longer time period. At the end of the day it’s all about PSL status.

"So‚ that’s a lot of pressure [speaking with jokingly tone]. It’s enjoyable pressure‚” he added.

The Maltese who is a former coach of another Limpopo side‚ Black Leopards‚ took over the reins at the team also known as Bakgakga Ba Mphahlele just before the end of last year on 31 December.

The 53-year-old signed a three-year deal with the 2018 Telkom Knockout winners.

Since then he has managed seven games (league and cup)‚ winning only three.

“We have three days to plan and prepare. Our focus isn’t the Nedbank Cup now.

"It is the PSL. We have a very tough game against Gavin Hunt [Wits]. I know Gavin‚ he’s got the upper hand on me – twice last year‚ and I want to rectify that‚” said Kerr.

“Next game is Saturday. Bring on Wits and let’s see what happens.” Baroka face Wits at Peter Mokaba Stadium in a 3:30pm kick-off.

Team SA came back from the World Athletics Championships in Doha last year without a single medal - an ominous sign before the Tokyo Olympic Games ...
Sport
2 years ago

"Underestimate us at your own peril" is the warning from Amavarara FC to fellow competitors in the Nedbank Cup.
Sport
2 years ago
Next Article