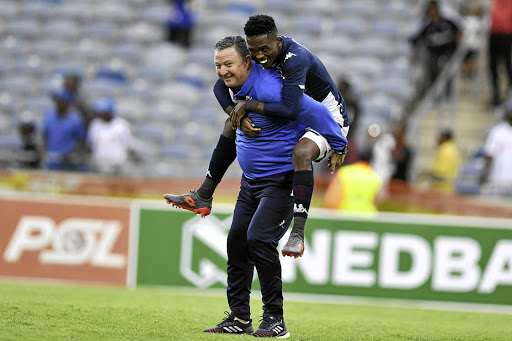 As they're almost five games behind in the league programme and in the Nedbank Cup last 16, Bidvest Wits coach Gavin Hunt doubts if they have enough playing personnel to tackle the gruelling schedule.

Wits booked their berth in the Nedbank Cup last 16 by dispatching Orlando Pirates 3-2 on penalties in the first round at Orlando Stadium at the weekend.

Their involvement in the CAF Confederation Cup, where they have since been eliminated from the group phase, left the Students with a backlog of league games.

The university club begin playing catch-up by hosting Maritzburg United at Bidvest Stadium tomorrow (7.30pm). Wits then face Baroka away three days later and that will be followed by a fixture at home to Highlands Park on February 19. Hunt's men also have a Nedbank Cup quarterfinal tie on the weekend of February 22/23.

"Our squad is the smallest in the league; we got 22 players [in fact they have 28 players registered for this term]. Today [on Sunday at Pirates] we lost another one [Elias Pelembe, who was red-carded]. The upcoming weeks will be difficult for our squad, but we have to manage it," said Hunt.

After just 15 games, Wits are fifth on the log, having garnered 30 points, 15 behind leaders Kaizer Chiefs. Hunt has insisted they aim to give both the Ke Yona Cup and the league a full go.

"We can't prioritise cups or games, we are a small team. Every game is important to us, but we can't be like Liverpool and play under-19s [in the Nedbank Cup as the English giants do in the FA Cup]... no, no, no. So, it is going to catch up with us," said Hunt.

Against Pirates, Wits surrendered a two-goal advantage and allowed the hosts to take the game into extra-time.

In extra-time, Zakhele Lepasa scored what looked like the winner for Bucs, but Gift Motupa struck seconds before the final whistle to make it 3-3, sending the game to penalties.

After crashing out of the Nedbank Cup at the hands of Bidvest Wits at the weekend, Orlando Pirates are in danger of ending their sixth season without ...
Sport
2 years ago

lSafa's head of referees Tenda Masikhwa has hailed Victor Gomes as being among the best referees in Africa despite some of his questionable calls.
Sport
2 years ago
Next Article