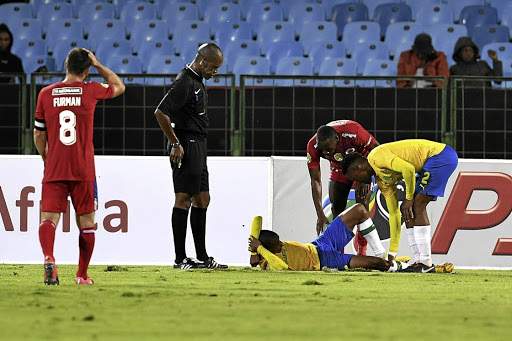 Mamelodi Sundowns have suffered a big blow as one of their most important players, Thapelo Morena, is set to miss the rest of the season.

Morena suffered a horrific injury when he fractured his ankle, and caused ligament damage in Saturday's 1-0 Nedbank Cup first round win over SuperSport United.

The 26-year-old left the field on a stretcher in the 69th minute at Loftus Versfeld on Saturday. The club confirmed yesterday that he would undergo surgery, ruling him out of the season.

"It's a difficult one with Thapelo. We need him for the league and Champions League. He is an important player for us," coach Pitso Mosimane said.

"I don't have the proper information from the doctor, but he went to hospital. The ankle went out of the joint but brought itself back in which we can say is a positive."

The Brazilians edged United with a Sibusiso Vilakazi goal in the 24th minute, assisted by Morena, to advance to the Nedbank Cup last 16.

Sundowns had to grind to overcome their feisty neighbours.

Mosimane is crossing fingers that his team gets drawn against a lower division team in the draw for the last 16 of the Ke Yona Cup that takes place tonight (7.30pm).

"[For] next round, can I also get a nice draw like others. I've got Champions League and the domestic league, I need a breather. Can I get Amavarara please?" he said.

"If you give me Amavarara, VUT all the way to the final and TS Galaxy [in reference to Kaizer Chiefs] in the final, I mean really it's for you to take it."

Sundowns are in the running in three competitions. They have already won the Telkom Knockout.

"You can't buy the spot for Champions League, you have to play for it. The league is for Chiefs to lose."