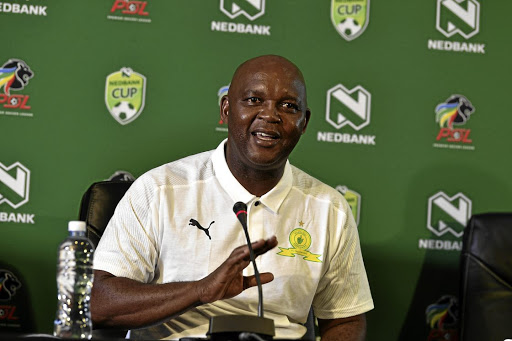 Mamelodi Sundowns coach Pitso Mosimane could not resist taking a dig at the drought-stricken Kaizer Chiefs and Orlando Pirates as he prepares to take on SuperSport United in the Nedbank Cup first round.

The two Pretoria clubs, Sundowns and SuperSport, do not suffer from the same problems that have affected the Soweto clubs. Downs are the holders of the Telkom Knockout while coach Kaitano Tembo led United to the MTN8 earlier.

In Soweto, Chiefs have endured a trophy drought spanning five years while at Bucs it is six. All four teams are set to compete in the Nedbank Cup this weekend.

"Be careful this weekend, hey! It's the last trophy left and you might not even get the league. So it may be another year without a trophy," Mosimane said cheekily, without mentioning names.

"At least me and Kaitano, the Tshwane people, have got something. Other people can't talk."

Mamelodi Sundowns coach Pitso Mosimane has warned the two teams ahead of him in the Absa Premiership to not get overexcited until they have their ...
Sport
2 years ago

Mosimane said there are no guarantees in football.

"Kaitano won the MTN8, can we say he doesn't want the Nedbank Cup? We won the TKO, can we say we know we are going to win this cup?" he said. "They say one bird in hand is worth two in the bush."

Sundowns will face SuperSport for the fifth time in all competitions this season when they square off at Loftus Versfeld tomorrow (8.15pm).

"United are cup specialists. When you go up against them in cups you can never be sure of the results," he said.

"They eliminated us from the MTN8. We do well against them in the league but when it comes to the cup I don't know what happens. I think they are the favourites."

As they prepare to compete in their fifth clash of the season, Mosimane does not plan to rotate the team.

"I don't like this thing of chopping and changing."

The emergence of hugely improved defender Motjeka Madisha is a healthy poser for Bafana Bafana coach Molefi Ntseki according to Mamelodi Sundowns ...
Sport
2 years ago

Mamelodi Sundowns coach Pitso Mosimane has given insight into how he managed to snap the dominance of the strong and hugely experienced North African ...
Sport
2 years ago

Following Mamelodi Sundowns' record run in the CAF Champions League group stages which saw them seeded for today's draw in Cairo, what did we learn?
Sport
2 years ago
Next Article