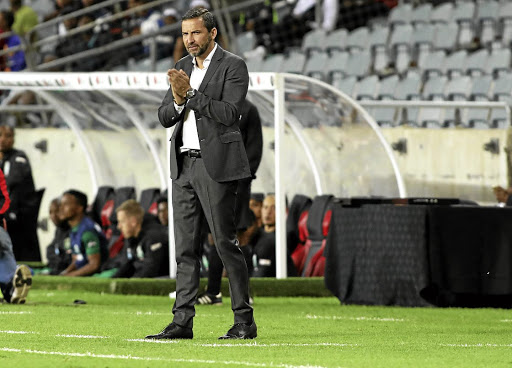 As Orlando Pirates coach Josef Zinnbauer prepares for his first cup competition at the club, the German is not putting himself under pressure to end the six-year trophy drought.

Zinnbauer will get his first taste of cup competition in SA football in the Nedbank Cup when Pirates host Bidvest Wits at Orlando Stadium on Sunday (3pm). The last time the Soweto club won a cup was in 2014, when they won this very cup.

"Playing against Wits is not easy and they have a top coach who has won the league four times. For us the focus is to win this game and then worry about the next opponent."

Considering that his team is on a five-game winning streak in the league, that type of form would be good enough for them to be crowned cup champions as it takes five wins to win the Ke Yona Cup.

The 49-year-old says his team will have to find a winning formula in the cup.

"It's football... nothing is easy. It's all about hard work and we gather information to share with the players about tactics," Zinnbauer.

"The squad is hungry for new input. At the moment we are having success but it's a process."

With the league's leading scorer Gabadinho Mhango suspended, Zinnbauer was coy on who would stand in for the Malawian striker.

"Mhango is an important player for us but we have good players in the second line. Now it's their chance after waiting for their chance," he said.

"They gave very good performance in training and we will see. I hope we can make the right decision."

But Mulenga, Shonga also stake a claim.
Sport
1 year ago

Less than 22‚000 tickets are left for the highly anticipated Soweto derby between resurgent Orlando Pirates and their run-away log-leading township ...
Sport
1 year ago