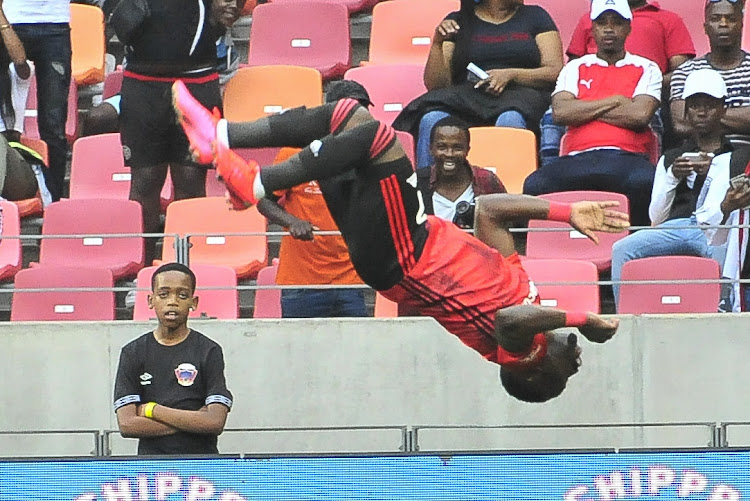 Gabadinho Mhango will miss out on an opportunity to increased his 15-goal tally he has achieved so far this season.
Image: Deryck Foster/BackpagePix

That is the tough selection call facing Pirates coach Josef Zinnbauer ahead of the showdown against Wits at Orlando Stadium on Sunday.

The suspended Mhango picked up a fourth yellow card in Pirates' 2-1 Absa Premiership victory against Chippa United last weekend where he took his tally of league goals to 14‚ which includes 10 in his last nine matches.

“We know that Gabba (Mhango) is a big player for us at the moment but in the second line we have other players.

"Now is the chance for those players who have been waiting for opportunities to take over from him‚” said Zinnbauer.

Some of the attackers at Pirates who have not seen enough game time since Zinnbauer arrived at the club in December are Tshegofatso Mabaso‚ Zambians Justin Shonga and Augustine Mulenga.

“We are working very hard during our training sessions with the strikers and I hope to have a good hand in terms of picking the player who will replace Gabba.

"I hope that I make a good decision by choosing the player who will make the goal.”

The German mentor said his players are aware that there are no second chances in cup football.

“It is a cup game and you have a chance to get to the next round or you are out‚" he said.

"We have an opponent who is the favorite in this game because they have a big squad and they have top players.

"Some of their players are internationals and it is not going to be easy to play against Wits.”

“I have a good feeling in SA‚ I think the positive results are part of this‚" he continued.

"The next game is important and we have to focus on Wits because they are one of the best teams in the league.

"They have played 15 matches in the league and they have 30 points‚ which mean if they win their games in hand they will go above us on the log.”

Zinnbauer‚ who has won six and drawn one of his seven matches since he arrived in the country in December‚ said he has been warmly received by the fans.

“I meet a lot of people in the street‚ all of them are head coaches and they give me a lot of information from a technical point of view.

"I am happy about it because we are winning games.

"It is a good feeling I get from the supporters‚ it is what I need and I am happy with the squad and games at the moment.”

Kaizer Chiefs celebrate their 50th birthday this year and as a tribute, SportsLIVE put together a wonderfully packaged scripted podcast - the first ...
Sport
1 year ago

Ernst Middendorp has said that Kaizer Chiefs playmaker Khama Billiat was handed to the club’s medical staff in late December‚ with the message not to ...
Sport
1 year ago
Next Article