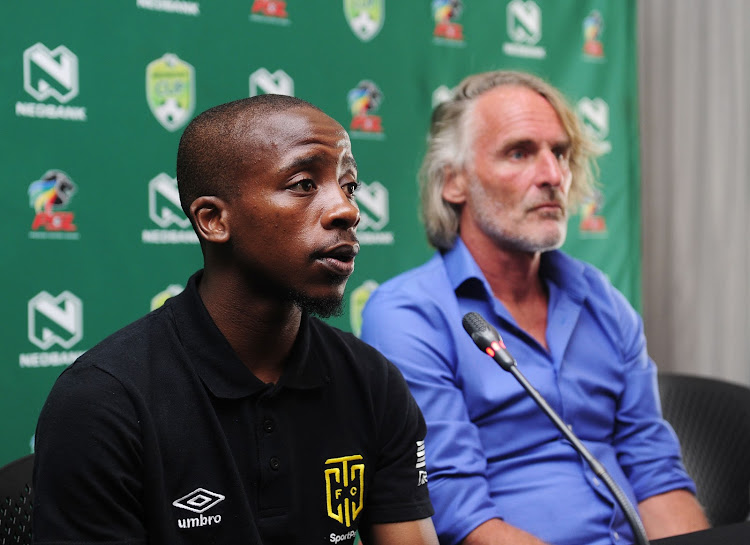 Cape Town City midfielder Thabo Nodada (L) speaking at a media briefing in Cape Town alongside head coach Jan Olde Riekerink (R) on February 6 2020, arrived in the Mother City aged 21 and has grown to be counted among the senior players at the Citizens.
Image: Ryan Wilkisky/BackpagePix

Cape Town City midfielder Thabo Nodada admits that there has been plenty of introspection in what has been a difficult season of the Absa Premiership‚ but says he and the team are in a much better space as they head into their Nedbank Cup last 32 clash away at Mbombela United on Sunday.

Nodada has lifted the MTN8 and the Telkom Knockout with City‚ and is now looking to complete his set of domestic cup competitions with the Nedbank trophy in a season in which his leadership skills have been tested‚ but he has emerged as a senior player.

“If you are not going to look at the age and rather look at the minutes on the field and the role that I am now playing‚ then yes‚ you can call me a senior player.

“Sometimes I shy away from the responsibility to be honest.

"Sometimes when it gets hot I am also looking for someone to pick me up. Luckily‚ with the people we have in the team‚ they have been able to say things I am uncomfortable saying.

“Things that I don’t have the balls yet to say. I say a few words on the field‚ but I don’t ever want to be a senior player because of stuff that is happening off the field.

“If I say something on the field‚ I have to go on it and back it up‚ and that is where the confusion was at times.

“Now that things are slowly coming together‚ I feel more confident when I say some things.”

He said he hoped that he has inspired some of his teammates with both his words and actions.

“People see it‚ people believe it and are inspired and want to do more. The coach [Jan Olde Riekerink] is the one who has given me the armband on occasions and he has maybe seen leadership qualities in me that I did not see myself.

“This season I have learnt a lot. I have learnt to be tougher and say some uncomfortable things. It is something that I am proud of that is brewing.”

The match against GladAfrica Championship side Mbombela will be played at the KaNyamazane Stadium‚ where Nodada has some fond memories.

“We don’t know what to expect‚ other than a fight obviously.” he said.

“Looking at what happened last season‚ when a second division team [TS Galaxy] won the competition‚ the smaller teams will feel like they have a chance.

“It is going to be a difficult game in the heat. I had a chance to play there before with [Mpumalanga] Black Aces.

"If it means anything‚ the last time I played there I got a Man of the Match against Maritzburg in Nedbank‚ so pretty chuffed to go back.

“It is a chance for us‚ irrespective of what has happened this season‚ to end on a high. We are going to give it everything and I look forward to Sunday.”

Durban is set to host Africa's first World Football Summit next month, a lucrative event with a projected economic impact of nearly R195m.
Sport
2 years ago
Next Article