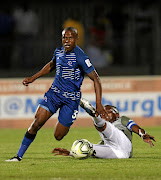 Having not even played the first round yet, Maritzburg United are already dreaming of being in the Nedbank Cup final again.

"Our aim is to go all the way to the final and I strongly feel we have that chance because we're hungry for success and there's that commitment among us as players. Once you're in the final, it is easier to win the cup because it's just that one game that matters," said the club's winger Mxolisi Kunene.

Maritzburg will face the first test of their ambition to replicate the feat they accomplished in 2018, where they lost 1-0 to Free State Stars in the decider, against top-flight newcomers Stellenbosch in the first round at Athlone Stadium tomorrow (8pm).

According to the 28-year-old Kunene, their hunger also stems from losing the Telkom Knockout trophy to Mamelodi Sundowns, who punished them 2-1 despite having scored first in the final at the Moses Mabhida Stadium in December.

"It was painful to lose the final, but we dusted ourselves off and moved on. We want to use this Nedbank Cup to make up for that loss," noted Kunene, who has featured in 20 of his side's 24 games across the league and the TKO.

"Stellenbosch are a tough team to play against, but I don't think there's anything that can beat our commitment and focus. We are ready for them and we'll give our all."

The Team of Choice will be without their speedy forward Gabriel Nyoni, who's suspended alongside utility defender Pogiso Sanoka. Nyoni was red-carded in their last match, a 1-1 league draw at home to Cape Town City last Friday, while Sanoka received his fourth yellow card in the same encounter.