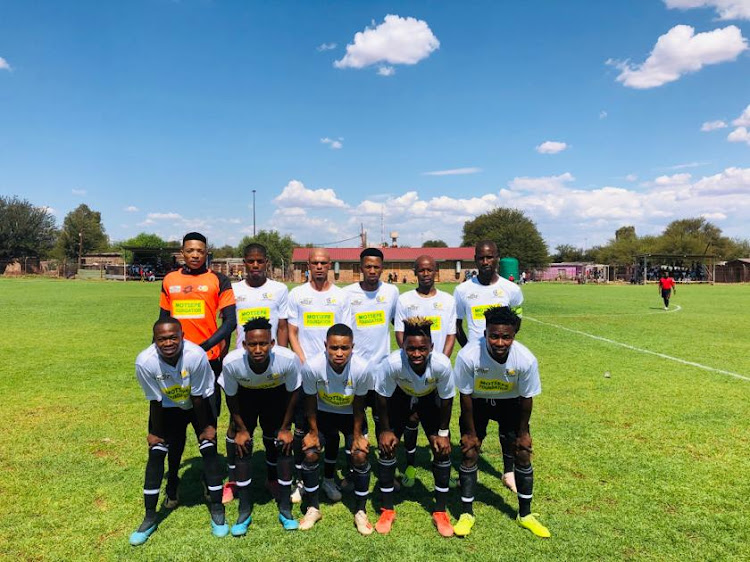 Hungry Lions, the third division team from Postmasburg in the Northern Cape, will take on first division Jomo Cosmos in the last-32 of the Nedbank Cup.
Image: Hungry Lions FC/Facebook

For Hungry Lions‚ the unusually named third division team from tiny Postmasburg in the Northern Cape‚ meeting Jomo Cosmos in the Nedbank Cup is a rare shot at the South African football limelight.

A mining town in the arid Northern Cape‚ far smaller even than neighbouring cousins Upington and Kimberley with a population of around 30‚000‚ it is safe to say not a lot big happens in Postmasburg.

So the town’s football team being in the last-32 of the Nedbank Cup‚ in a televised game against Cosmos – who campaign in the GladAfrica Championship (first division) now‚ but remain a big name in SA football owned and coached by a giant in Jomo Sono – is a huge deal.

“Postmasburg is in the centre between Upington and Kimberley‚” Lions’ coach Henry Basie explained to TimesLIVE from Potchefstroom‚ where his team took a four-hour bus trip to early this week to prepare for most of the squad’s first televised game at Olen Park on Sunday.

ABC Motsepe League club Lions have no relation in sponsorship or ownership with the fast food chain Hungry Lion. In fact‚ their existence and unusual name predates the food outlet – started in 1997 – by more than a decade.

Hungry Lions were established by Basie’s uncle – Stefaans Basie‚ an employee then of Spoornet‚ who still works for Transnet‚ and who remains the owner and chairman of the team – in the 1980s and are nearly 40 years old.

Initially they played solely in friendlies and tournaments. In around 2000 they entered organised Local Football Association soccer‚ then the SAB League (fourth division) and in around 2004 “got promoted to what you then called the Vodacom [now the Motsepe] League”‚ Basie said.

The club continue to be funded by players and supporters who have jobs contributing ad-hoc money on a monthly basis‚ when they possess enough cash.

Most of their players are strictly amateur‚ but they have managed a clubhouse to house their younger players – about 13 or 14 are under-23‚ said Basie.

They attract one or two modestly-paid ageing professionals‚ such as ex-Bloemfontein Celtic winger Moses Spandeel (39)‚ an old friend of Henry Basie‚ to add experience.

Basie (also 39) was a player when Lions progressed up the amateur ranks to the third division. He has his own company‚ in construction and “other things”‚ and has been a coach for about five years.

Currently he has Lions in first place in the Northern Cape‚ on path for the nine-team Motsepe playoffs for promotion to the first division‚ where they narrowly failed in 2014-15‚ needing a win from their last match but only achieving a draw.

That was the club’s previous crowning glory. Their moment in the limelight against Cosmos will be another.

“Some of the players come from Kaizer Chiefs and Orlando Pirates’ MDC [reserve] teams‚ so some are familiar with televised games‚” Basie said.

“Some of them it’s the first time. Some of them are excited. I just hope the excitement and anxiety does not get the better of them. But‚ ja‚ they will cope.”

The dream‚ of course is to go a step further and perhaps meet a PSL glamour team.

“It’s everybody’s dream to play a Chiefs or Pirates‚” Basie said. “When the draw happened everyone was screaming ‘Chiefs’‚ ‘Pirates’.”

Hungry Lions seems an unusually expressive name for a football team. Basie said there is no particular significance in how the name originated‚ and when one thinks about it‚ in meaning it actually just makes sense.

“I never questioned the name – I love it when I hear it‚” he laughed.

This week Sono admitted to knowing nothing more about Lions than their name.

He said‚ given how results have gone against his team in the NFD‚ where Cosmos are struggling in third-last place‚ he hope not to be “mauled by them”.

Lions will be out to prove just how hungry they really are.