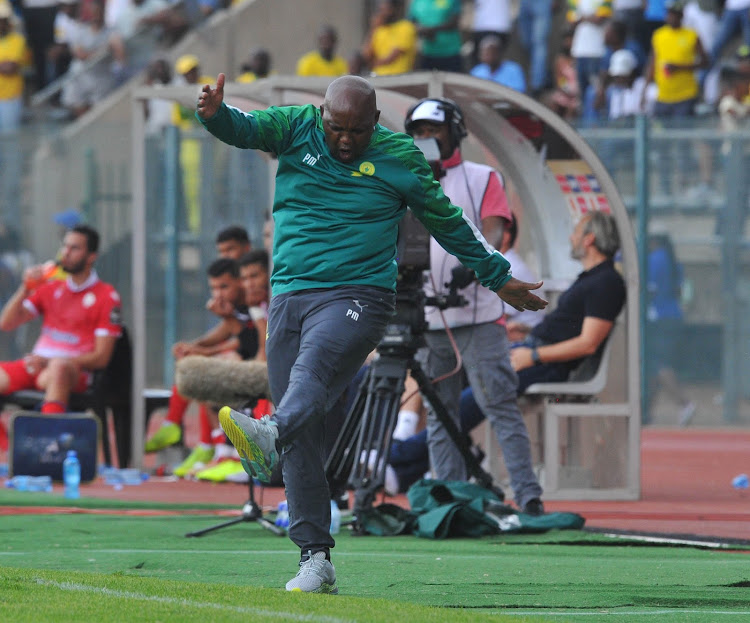 Mamelodi Sundowns coach Pitso Mosimane has given insight into how he managed to snap the dominance of the strong and hugely experienced North African teams in the Caf Champions League.

In the same period‚ Enyimba of Nigeria and TP Mazembe of the Democratic Republic of Congo have won the tournament twice each while Sundowns only lifted the trophy once in 2016.

Mosimane said Sundowns turned the tide when they started to play to their strength of keeping the ball and it is one of the reasons that they reached the quarterfinals without losing a game at the weekend.

“We play the same way and the only way to beat the North Africans is to have your passing patterns right because they don’t like to chase the ball‚” he said.

“Here at home‚ people are happy to stay and wait for one quick counter attack‚ you know the story.

"North Africans like to dominate but if you want to frustrate them don’t give them the ball‚ have your triangles correct and let them run.”

Mosimane said playing the ball in the air does not work because they have physical presence.

“Work them mentally and you will see them starting to fight among themselves.

"If that happens‚ then you know that you got them.

"If you take the ball up in the air you won’t win because they are strong aerially.

"That’s why some of the teams that play long balls against the North Africans don’t get it right.

“You have to give the ball to Andile Jali and Hlompho Kekana‚ but sometimes people are afraid when you do because they fear that it will be stolen‚ but that is the price to pay.

"Manchester City‚ Bayern Munich and Liverpool take those risks‚ you can take the ball up in the air and try to be safe but it belongs to everybody when it’s up there.

"I don’t want the ball to be 50/50 and if you want to play the ball from the back you have to practice until the players are confident to do that under pressure.”

The Brazilians will know their quarterfinals opponents on Wednesday.

New Zambia coach Milutin Sredojevic explained that he took the Chipolopolo job because of the challenge of getting the team back to the top of ...
Sport
2 years ago
Next Article