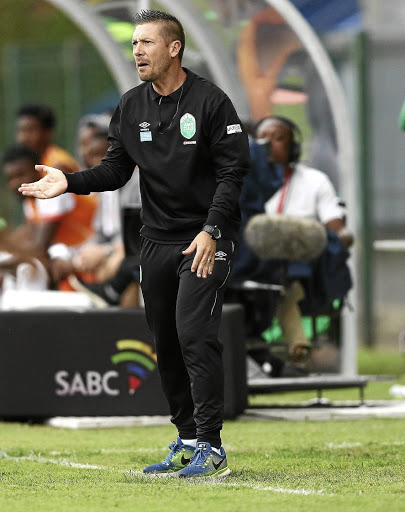 Clark has been in charge of Leopards since Cavin Johnson was fired last week. Johnson became the third coach to leave Lidoda Duvha this season after Lionel Soccoia and Luc Eymael parted ways with the David Thidiela-owned club.

Clark got his reign off to a positive start after Leopards beat Stellenbosch 2-1 at the Thohoyandou Stadium on Sunday. Mwape Musonda and Thabo Matlaba got the goals for them while Ryan Moon scored for Stellies.

"I am very happy to start off with three points. It is great, especially where we are. The chairman took a risk with me but as a young coach I've also taken a risk because the team is not in a good place," Clark said.

"Not many young coaches would be brave enough to take the job and try to save the team. I had to stand up and take that responsibility. It was a psychological boost of getting the win after the rough week we had as a club with all the changes."

The win moved Leopards up to 14th on the table with 20 points from 20 games. Clark wants to make sure the team win their home games.

"It's critical that we win our home games. We need to make Thohoyandou our fortress. We need to get more victory in the remainder of the season. It's important that when teams come here they feel the intensity not only of the heat but from our play as well."

He hailed the return of Mogakolodi Ngele who is back from an injury.

"Tsotso [Ngele] is also dangerous on the set-pieces. It was important to get him on the pitch because he is an influential player and we need those players on the pitch."

Leopards will face Bidvest Wits in the league at Milpark on Thursday (7.30pm).

Cavin Johnson says we will have to “wait and see” over his future at Black Leopards after the Limpopo side suffered a 1-0 defeat at Cape Town City on ...
Sport
2 years ago

Less than 22‚000 tickets are left for the highly anticipated Soweto derby between resurgent Orlando Pirates and their run-away log-leading township ...
Sport
1 year ago

Bidvest Wits gave CAF their all