Komphela still has the right medicine for underdogs 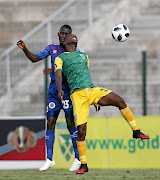 Komphela has coached a number of underdog teams in his career including Maritzburg United, Platinum Stars, Bloemfontein Celtic and Arrows.

He was able to get the best out of players with limited resources and is seemingly doing the same at Abafana Bes'thende.

"We spent the better part of the season at number four. Apart from the notorious chasers of the Premiership we should top the list of the market," he said.

"If we can't be [Kaizer] Chiefs, [Mamelodi] Sundowns, [Orlando] Pirates or Bidvest Wits, then we have to get where Cape Town City and SuperSport United are, that's where we need to be. So we are trying to win our own league within our own market."

The team is currently in the top half of the table with 27 points from 20 games. The KwaZulu-Natal club edged SuperSport 1-0 thanks to an own goal from Luke Fleurs.

With their survival almost guaranteed, Komphela said the aim was to go for as many points as possible.

"The important thing is to be on 27 points and get beyond the threshold for relegation so that we play with ease and a better ambition of getting to 40 points. There is stress when you are playing down there. If you can imagine teams that are on 17 points, it shows how tough it is."

The former Kaizer Chiefs coach said he was turning the players into warriors.

"We are fighting, we don't play. Yesterday will not build a tomorrow. You can look back but you still have to look forward. There is no complacency here. When you start to be complacent and familiar then you become mediocre. We are not going to be comfortable here," he said.