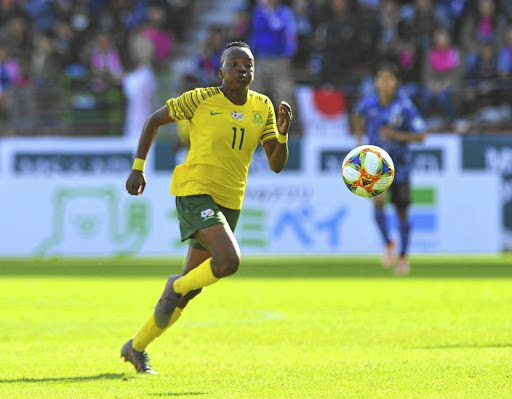 SA women's soccer star Thembi Kgatlana has signed a deal with Benfica of Portugal for her first move to Europe after stints in the US and China. / Sydney Mahlangu

At the rate SA women's football is exporting players to Europe, this year promises to be a prosperous one for Banyana Banyana.

Thembi Kgatlana’s move to top Portuguese club Benfica is the latest in a number of high-profile signings for Banyana Banyana players as the country ...
Sport
1 year ago

Banyana coach Desiree Ellis strongly believes Banyana will profit a great deal from such transfers. She foresees SA matching the continent's powerhouses such as Nigeria and Cameroon.

"We played Cameroon and Nigeria in 2016, 90% of their players at that time were playing abroad and we struggled to match that.

"But now that we are also exporting more players, I think we will do well and compete with them," said Ellis yesterday.

"Even at the last Afcon [in 2018 in Cameroon], we couldn't really go pound for pound with players who are based overseas. The experience of playing in Europe isn't something you can buy, I am very happy for our players because the country will benefit.''

Ellis continued: "Thembi and Linda have been playing overseas for a while now, but it will be their first time in Europe. Thy have a chance to play [Uefa Women's] Champions League. great opportunities lying ahead."

Banyana Banyana coach Desiree Ellis has come from nothing to become a pathfinder in South African football and women's football in particular.
News
1 year ago