'I was getting emotional,' says Orlando Pirates star Vincent Pule

The Pirates star dedicated his goal to Mantwa Khoza, the late wife of club boss Irvin Khoza, who was buried a few hours before the Bucs faced Usuthu at the Orlando Stadium on Saturday 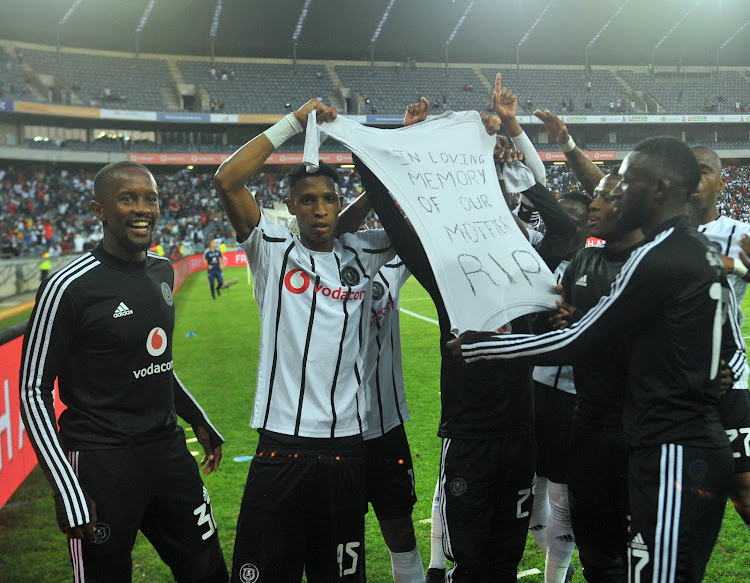 Vincent Pule celebrates his goal with teammates during the match.
Image: Sydney Mahlangu/BackpagePix

A weight has been lifted off Vincent Pule's shoulders after he found the back of the net for the second time this  season at the weekend.

The Pirates star dedicated his goal to Mantwa Khoza, the late wife of club boss Irvin Khoza, who was buried a few hours before the Bucs faced Usuthu at the Orlando Stadium on Saturday.

“After scoring that goal… like I said I was getting emotional,” said Pule.

“I haven’t been scoring and I think I have to work more on my finishing.

“The message was to play for Mme Mantwa and I think we played well and may her soul rest in peace.”

Pule’s other goal this season was the wonderful free kick he curled in against Kaizer Chiefs in November in a game Bucs lost 3-2 before Zinnbauer's arrival.

The run that includes six victories and two draws has propelled Bucs to fourth place on the Absa Premiership table and Pule is happy that he’s contributed after missing numerous chances.

“I think it’s been a while since I scored.

"I think the last goal that I scored was against Chiefs and I was a bit emotional (when he scored against AmaZulu),” said Pule, whose team travel to Port Elizabeth to face Chippa United on Saturday.

“When you’re a person that likes scoring goals and things are not falling for you, you become emotional. I was relieved when I scored that goal.

“I think we’re working hard as a team and we have a good spirit now. I think we have to continue because in the first round we didn’t play well, and I think in this round we’re at least keeping clean sheets and we know where we’re going.”

Pule reckons the Bucs struggled in the first round and they started the second half of the season with some luck on their side, hence their incredible run.

“I think in the first round we were not scoring goals and we were conceding,” said the left-footed Bucs attacker.

“I think now it’s better, we’re scoring more goals and quicker goals in the first half.

“We get a lot of chances and we score goals. I think it’s better because we’re now winning games. I think we needed luck in the first round and we didn’t have it.

“I think now our luck is back, we’re scoring goals and winning games.”

Pule said Bucs are likely to get a place in either Caf Champions League or the Confederations Cup next season if they keep going the way they have since December.

“I think we’re taking one game at a time and I think our confidence is back,” he said.

“We’ll keep on fighting and performing. I think it’s possible to have a top three finish.”

Sundowns ranked the eighth best in Africa and 83rd in the world, ahead of Wits and Pirates

Mamelodi Sundowns have been ranked the eighth best in Africa and 83rd in the world by The International Federation of Football History & Statistics ...
Sport
2 years ago

Basement dwellers AmaZulu have not won a game in 2020 but coach Josef Vukusic is confident that his job is not on the line.
Sport
2 years ago

Ernst Middendorp has described the football dished out by his table-topping Kaizer Chiefs in their last-gasp 1-0 victory over Lamontville Golden ...
Sport
2 years ago
Next Article