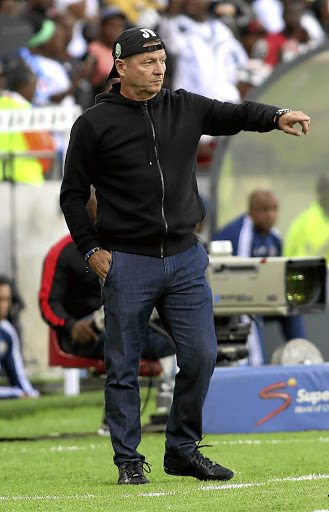 Despite the uncertainty around his future, AmaZulu coach Jozef Vukusic is still determined to give his best shot in the last 10 games to propel Usuthu to safety.

While it's believed that Vukusic could be fired if he fails to get the desired results in their next two games against Polokwane City and Golden Arrows respectively, the Slovakian tactician looks unfazed, suggesting he's the full backing of the club's hierarchy.

"I don't feel I am alone in this battle [against relegation]. We must survive and I believe we'll survive. The management, the players and my technical staff have been responding well, giving their all," said Vukusic.

"I don't spend even one second going into a direction of speaking about rumours and things like that. We know what we must do and we're positive that we'll turn it around. Everything is under control."

Usuthu suffered their 11th defeat of the season at the hands of Orlando Pirates at Orlando Stadium at the weekend. Vincent Pule netted the match's solitary goal that left AmaZulu unmoved at the bottom of the log, with just 17 points from 20 games.

One of AmaZulu's undoing this season has been their over-reliance on in-form striker Bonginkosi Ntuli, with 10 of their overall 11 league goals coming from him.

However, Vukusic doesn't see this as a problem at all. "I don't care if he [Ntuli] scores the next 10 and nobody else scores, I don't care! Because our game is [centred around him]... even today [against Pirates] we played combinations."

The former Polokwane City coach was also proud of his charges' display against Pirates, hoping to build on it going forward.

"Performances like this [referring to the Pirates game] are motivating. We want to keep playing like this and hope something can come out of that," said Vukusic.

AmaZulu desperate for win at Pirates

While their coach is said to be living on borrowed time, AmaZulu skipper Tapelo Xoki feels victory against an on-form Orlando Pirates side at Orlando ...
Sport
2 years ago
Next Article