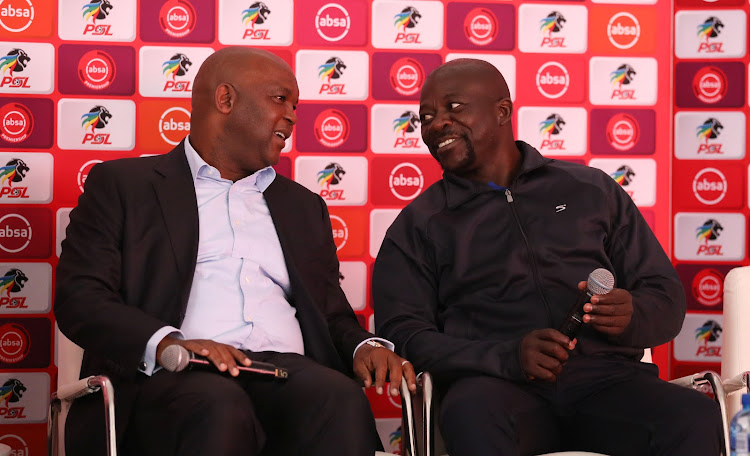 Mamelodi Sundowns coach Pitso Mosimane intends to push ‘well rested’ Kaizer Chiefs all the way to the finish line in what is expected to be an enthralling Absa Premiership title race.

Sundowns beat SuperSport United 2-1 on Sunday to narrow the gap on leaders Chiefs to seven points and Mosimane said May‚ when champions will be crowned‚ is still far away and he expects many twists and turns during the run-in.

Chiefs will add one more game to their league tally over Sundowns on Saturday when they visit Lamontville Golden Arrows at Moses Mabhida Stadium while Mosimane's charges return to Caf Champions League duty against Petro de Luanda in Angola.

“There is still a long way to go‚ May is still too far and anything is possible‚” said Mosimane‚ who added that he hopes Bidvest Wits disturb Chiefs' title charge as the two sides still have to play each other twice.

“They (Chiefs) have an advantage and probably Huntie (Gavin Hunt) will disturb them twice‚" he said.

"Chiefs also still have to play against Orlando Pirates and us‚ so the tile race is very much alive. They are on a honeymoon but give them respect because they are scoring goals.

“Imagine if we didn’t drop points twice against Wits and against Orlando Pirates last week‚ these things tell me that the race is alive.

"Somewhere and somehow you stumble but we must accept competition the way it is. It’s just that we are competing against a well rested team and that is not easy.”

Mosimane added that they have no choice but to perform the delicate balancing act of juggling domestic and continental commitments at the same time.

“I would like to talk about Wits because they run the same race with us and they are not a well rested team‚" he continued.

"Wits are coming from Egypt against the Libyan team and it’s very difficult to focus on the domestic front and be number one in the Champions League.

"This is reality but you keep going even though you are distracted because when you look‚ there is the league and suddenly it’s the Champions League while other people are just looking at one thing.

“You have domestic cup competitions and now we have the Nedbank Cup against SuperSport United and you know them with cups.

"I was here at SuperSport for seven years and it’s about cups and leave the other stuff.

"Huntie came‚ they changed things a little bit and they won three league titles in a row and you must give them respect for that.”

Sundowns have spent most of the season playing catch up matches and Mosimane said there is nothing he can do about it.

“Last year was tough for us because we were playing after Pirates all the time and they were winning‚" he said.

"It was working on our system.

"I remember we were in Morocco or somewhere on the continent and they were 12 points ahead of us by four games.

"They kept on playing and winning but we kept going.

"But the problem for us this time around is that we are not hitting five wins in a row and they (Chiefs) have hit seven or so.”