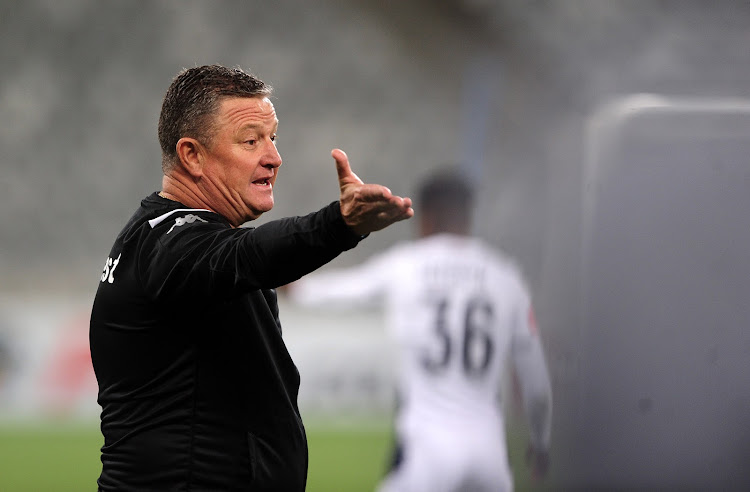 Gavin Hunt knows how to with the league championship.
Image: Ryan Wilkisky/BackpagePix

Gavin Hunt believes his side are still in the Absa Premiership title race despite a 2-0 loss to Cape Town City on Saturday that has put a dent in their chances.

There could yet be repercussions from that game after winger Sameehg Doutie and goalkeeper Ricardo Goss appeared to push referee Masixole Bambiso‚ which should lead to lengthy bans.

Wits trail leaders Chiefs by 12 points‚ but have three games in hand‚ and if they win those would move up to within just three points of the AmaKhosi‚ who were held to a 1-1 draw by Black Leopards in Thohoyandou at the weekend.

But games in hand are not the same as points in the bag‚ though Hunt says the rate at which his side are picking up points is encouraging‚ despite the weekend defeat.

“There are only two teams that have two points a game‚ us and Kaizer Chiefs‚” Hunt said‚ suggesting he feels his side are keeping pace with the leaders.

The gap could grow in the coming weeks‚ with Wits involved in CAF Confederation Cup action for the next two weekends‚ during which time Chiefs will play away at Lamontville Golden Arrows.

“We are only halfway now and they have played 18‚” Hunt said.

“We are going to be six or seven games behind soon as we go to Guinea [to play Horoya on Sunday] and then play the other team [Djoliba] the following weekend.

“And we can’t play in midweek [to catch up] because we have to travel.”

Saturday’s clash was a fourth in 10 days for Wits‚ but Hunt says he welcomes a tough fixture schedule with lots of games.

“I like to play a lot of games‚ I think it is good for the team and good for the players. We didn’t show that we were leggy [against Cape Town City].”

Aside from the possible suspension of two players‚ Hunt will also be worried about the fitness of Zimbabwe striker Terrence Dzvukamanja‚ who was stretchered off inside 10 minutes in Cape Town.

“That was another blow‚ the first 10 minutes he was running in behind them. He should have scored‚ he could have laid it across. He is a big blow.”

Wits’ next league match is scheduled for February 6 at home to Black Leopards.

Coach rubbishes rumours of exit.
Sport
2 years ago
Next Article