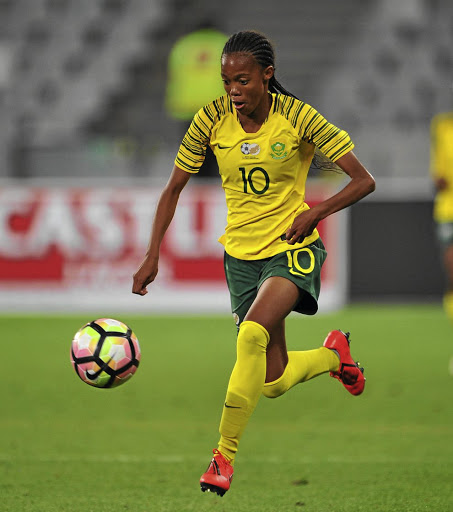 The 21-year-old‚ who was tipped to be a future superstar by respected former Banyana coach Vera Pauw‚ spent the past two seasons in the United States with Houston Dash and in China with Beijing BG Phoenix FC.

Djurgarden are no stranger to South Africans as they had midfielder Stephanie Malherbe on their books last season while the men’s side have had the likes of Lance Davids‚ Mark Mayambela and Siyabonga Nomvethe.

Banyana Banyana will be hoping not to be at the end of a morale-sapping lashing when they take on defending world champions the USA away in ...
Sport
2 years ago

“I am very happy and expectant to come to Stockholm and play for Djurgarden‚” said Motlhalo.

“I look forward to new experiences and to experiencing a new atmosphere. I know it's a good league with sharp competition‚ I also know that Djurgarden has historically been a good team even though it was really tough last season.”

She says she will tap the brains of Malherbe‚ whose 2019 season was ended prematurely by injury. “I played with her in the Olympics in 2016 so I know her well. I know she played in Djurgarden but I actually haven't talked to her yet about what it's like to play in Sweden. I hope I can join in and contribute to getting us higher up in the table this year. Hopefully we can join the upper tier.”

Motlhalo said she is busy sorting out paperwork before leaving for Sweden.

“I need to get my visa ready but as soon as it's done I'll go to Sweden. I'm looking forward to it.”

Djurgarden coach Jean Balawo says he is delighted with the acquisition.

“Despite her young age‚ she is a leader on the pitch and Linda has also faced two good and tough challenges in the US and China‚ as well as played over 40 international matches.”

The return of Thembi Kgatlana and Linda Motlhalo comes as a huge boost for Banyana Banyana as they entertain one of the world's powerhouses, Japan, ...
Sport
2 years ago

Banyana Banyana play their first international since the embarrassing elimination by Botswana from the Olympic qualifiers and will be looking to ...
Sport
2 years ago
Next Article