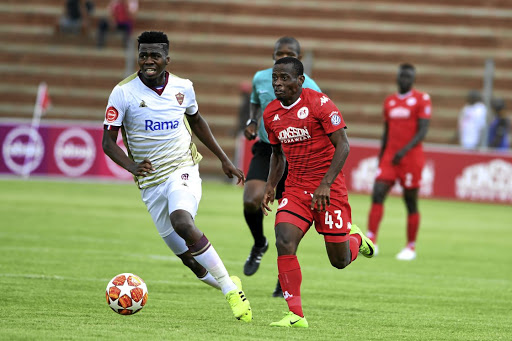 Mpho Matsi of Stellenbosch during the match against Highlands Park at Makhulong Stadium at the weekend.
Image: Lee Warren / Gallo Images

Stellenbosch midfielder Mpho Matsi has urged his teammates to prove that their emphatic victory in the previous game was no fluke.

Stellies raised eyebrows when they thrashed Highlands Park 4-1 in Tembisa last weekend. It was the rookies' biggest ever win and it came at a time when the team was desperate for points.

They next face struggling Baroka at Athlone Stadium tomorrow (8pm), where they will be looking to prove that luck was not behind their previous win. "It's up to us to go out there and show that we are hungry and that the win against Highlands was not about being lucky," Matsi said.

"As a team we are focused. The technical team has not allowed us to let our guard down. In fact, at the first training session we had after winning at Highlands, the coaches made us run like dogs. They gave us a tough session to remind us not to get comfortable."

For most of the season the club from the Cape Winelands struggled to compete in the top flight and were rooted to the bottom of the standings. They have been able to string together a few positive results and are now 11th on the table with 18 points from 18 games.

Matsi said his team still has a lot of work to do if they are to remain afloat. "There is still a lot of work to be done because we are not yet out of the danger zone. We still have a number of games to play. Fortunately, in the second half we have many home games. This is something we must use to our advantage. What was tough about the first half is that we played away a lot."

The club will be counting on some of their experienced players like Matsi, Morgan Gould, Robyn Johannes and Ryan Moon to guide the team to survival.